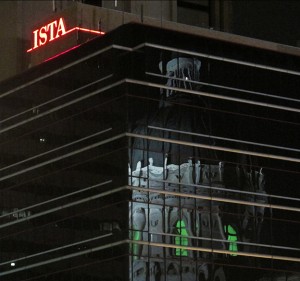 Windows on the front of the Indiana State Teachers Association reflect the image of the Statehouse.

More than two dozen Indiana schools will recoup some of their losses after the state and the Indiana State Teachers Association reached a settlement in a lawsuit over what state officials call a “Ponzi scheme” involving the union’s failed health insurance fund.

The lawsuit, filed four years ago by the state securities commissioner, involves a medical plan offered by the ISTA to teachers and school employees.

The state charges that the funds were improperly used on risky investments and to pay off long-term disability claims.

Secretary of State Connie Lawson Tuesday announced a $14 million settlement has been agreed to in principle.

The schools lost $27 million dollars, meaning the settlement will pay back about 50 cents on the dollar, but Lawson says schools have been waiting long enough.

“We heard from schools that they wanted to get their money back but also they were needing the money as soon as possible,” Lawson said.

ISTA spokesperson Mark Shoup says the settlement is the fairest resolution for all parties involved.

All 27 school corporations will have to agree to the settlement for it to go through.