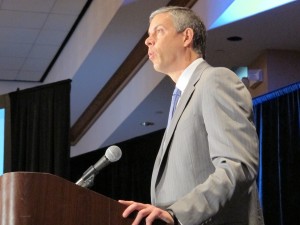 U.S. Secretary of Education Arne Duncan speaks in Gary in 2011 about No Child Left Behind waivers and reauthorization of the Elementary and Secondary Education Act.

Senate Democrats have penned a No Child Left Behind reauthorization proposal that’s expected to look a lot like the Department of Education’s current waiver process, writes Alyson Klein for Education Week:

U.S. Sen. Tom Harkin, D-Iowa, the chairman of the Senate education committee, is set to unveil a bill to reauthorize the No Child Left Behind Act that would require states to set achievement and growth targets for students, including subgroup students. The proposal, which faces steep political hurdles, mirrors the Obama administration’s NCLB waiver system but is a marked departure from the bipartisan measure that was approved by the education committee back in 2012.

All eleven other Democrats on the committee have signed onto the legislation, but the bill has no Republican sponsor, and it seems unlikely to garner GOP support, given that it outlines a more robust role for the federal government than the 2011 measure, which got the support of just three (relatively reluctant) Republicans.

Still, the bill is likely to find more support in the civil rights community than the bipartisan 2011 proposal to reauthorize the Elementary and Secondary Education Act, the current version of the NCLB law. That measure drew strong opposition from advocates for English-language learners, racial minorities, disadvantaged students and those in special education who saw it as watering down accountability.

“This is a big improvement,” said Kate Tromble, the director of legislative affairs for the Education Trust. She said the organization still sees some potential areas for improvement, but “overall is happy with the direction of the bill.”

We’ve written before that some civil rights groups felt the waiver applications of Indiana and several other states didn’t do enough to address socioeconomic achievement gaps. Indiana currently looks at the lowest achieving 25 percent of students instead of tracking specific subgroups.

But in a letter to the Indiana Department of Education, federal education officials expressed concern that the “super-subgroup” approach might leave behind some poor and minority students. Civil rights groups like that Harkin’s proposal requires intervention in a school where subgroups fail to make academic goals, writes Klein.

(It’s worth noting that Indiana lawmakers have asked the State Board of Education to rewrite the metrics governing the current statewide A-F school letter grade accountability system.)

What About The Common Core?

The Senate Democrats’ proposal would also require states that haven’t already adopt college- and career-ready academic standards do so. But as we’ve noted before, that doesn’t necessarily mean the Common Core.

Indiana lawmakers voted earlier this year in favor of a Common Core pause, but it isn’t likely to change the state’s waiver because it still requires standards that prepare students for post-secondary work or education.