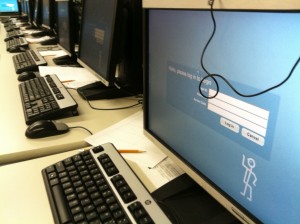 A login screen on a computer in an area set up for online ISTEP+ testing at Tecumseh Junior High School in Lafayette. The team charged with setting up more than 250 computers to administer assessments to rotating groups of more than 1,000 Tecumseh students worry Monday's glitches could slow down students taking exams on Tuesday.

With scores from this spring’s ISTEP test delayed at least six weeks, school districts across the state continue to express concern over the validity of results. As Megan Erbacher reports for the Courier & Press, Evansville Vanderburgh Supt. David Smith said at Monday’s school board meeting he’s worried because of the disruptions, projected gains won’t be there:

“You know, we were looking forward to the release of ISTEP results this year because our data indicated that EVSC ISTEP scores were to increase this year, just as our IREAD-3 scores increased and just as our graduation rates have increased this year,” [Smith] said. “But unfortunately we may never know.”

Smith said on Monday principals verified a growing list of test scores that will be analyzed due to concerns that the results may be invalid. To date at least 3,600 students, or 34 percent of EVSC students tested, will have their test results assessed for validity because their testing was interrupted by losing connection to the testing company’s Internet site. Smith said he’s certain that number will continue to grow.

He also noted that number doesn’t represent students who grew anxious as fellow students were booted off the timed test.

“So just how does one account for the validity of test scores of students who became more focused on test completion instead of test accuracy,” Smith wondered aloud. “Because we know all test takers, children and adults alike, are always instructed to take one’s time when taking a test, to read each question thoroughly before answering.”

The state’s largest school district, Fort Wayne, has said it won’t use results from the 2013 ISTEP unless validated by a third party. The Indiana Department of Education announced last week it plans to bring in an independent evaluator to assess scores.

More than 30,000 students experienced testing interruptions on April 29 and 30. As we’ve reported, schools are now working with the IDOE to verify how many kids were booted out of tests.

CTB/McGraw Hill is under contract with the state to provide testing services for one more year.