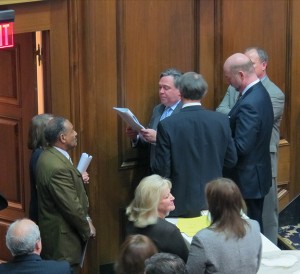 Indiana lawmakers confer in the corner of the chamber to consider a procedural question before passing omnibus education legislation that included language to pause Common Core implementation.

Indiana wasn’t the only state to pass last-minute legislation to block the Common Core, writes Michael McShane over at The Answer Sheet.

A Michigan state senator, Republican Tom McMillan, joined lawmakers across the country trying to stop the new academic standards when he successfully added language to the state budget last week that defunded implementation.

“Is it really this easy to block the Common Core?” writes McShane, a research fellow at the American Enterprise Institute and a proponent of the new academic standards:

It appears that McMillan and other House Republicans were able to use the 11th hour conference committee that gets the state budget passed to slip in a provision that prohibited the Michigan Department of Education from funding Common Core implementation. Before folks knew what hit them, the budget was approved, and the die was cast.

In doing so, he knowingly or not created a playbook for Common Core opponents in state houses nationwide. Trying to openly oppose the Common Core by amending state code is extremely difficult. Cutting the legs out from under it in the budget does not appear to be.

What does this mean for the Common Core writ large? The coalition that passed the Common Core is fragile. It seems now that not a week goes by without calls to oppose from the National Review, the Wall Street Journal, the Heritage Foundation, the Eagle Forum, or the Heartland Institute. Again, like them or not, agree with them or not, this concerted effort is going to rally Tea Party Republicans in state houses, and while they might not have the clout to change the education code, they might have just enough to excise the Common Core from the budget.

Those on the left who don’t want the standards tied to accountability systems too quickly will be able to take a shot as well if implementation doesn’t go their way. Don’t like the assessments? Don’t fund them. Don’t like the data systems necessary to calculate value-added? Don’t fund them. With multiple claims on budgets, from unfunded pension liabilities to increased Medicaid responsibility, there are more than enough reasons to justify clawing back funds. It’s a small-ball strategy that just might work.

As we’ve written before, Indiana lawmakers took a different approach: The “pause” proposal that passed the General Assembly in late April halts implementation pending a thorough review. That’s left teachers and administrators already using the new standards in their classrooms unsure how to proceed.

The latest guidance from the Indiana Department of Education instructs schools to continue Common Core instruction in kindergarten and first grade while teaching the new standards in tandem with the Indiana academic standards in all other grades.

The State Board of Education has until next summer to reaffirm its support of the Common Core or adopt new standards for Indiana. It’s likely whatever standards the board selects next will look a lot like the Common Core because the state must maintain college- and career-ready standards to keep its No Child Left Behind waiver from the federal government.