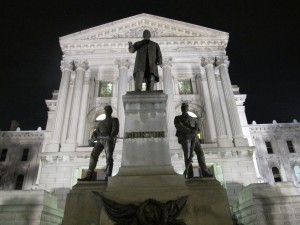 The Indiana Statehouse, with the statue of Gov. Oliver P. Morton in the foreground.

We’ll learn Monday what will become of Indiana Senate proposals to offer in-state college tuition to some undocumented immigrants and to set aside state grant money for school resource officers.

Those are stories we’re following this week at StateImpact with just 11 days left in the Indiana General Assembly’s session.

By rule, Monday is the last day for Senate bills to earn their initial up-or-down vote from House lawmakers. This allows time for conference committees, in which House and Senate lawmakers can hash out differences in bills, before the General Assembly adjourns on April 29.

What We’re Working On: