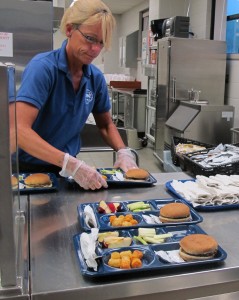 Students in some Indiana school corporations could see steadily increasing school lunch prices in years to come until their districts satisfy a new mandate from the U.S. Department of Agriculture, our colleagues at Indiana Public Media report.

That’s because USDA officials say some schools are charging less than the $2.86 per meal they receive from the federal government’s program to pay for low-income students’ lunches.

“Funding paid meals below the cost of their production effectively shifts federal subsidies designed for the lowest-income children to others,” USDA officials wrote in a 2011 report. “It can negatively affect all children by limiting the funds available to provide nutritious meals.”

The USDA now is requiring districts to charge $2.59 per lunch — the difference between the reimbursement amounts for a free meal ($2.86) and for a reduced price meal ($0.22).

For students in the Nineveh-Hensley-Jackson United School Corporation, the mandate will mean a five-cent increase on breakfasts and a 10-cent increase on lunches — and, somewhat paradoxically, it has district officials concerned the increased price will cause more families to apply reduced-price meals in the future.

“Since our lunch is $2.35 this current year,” Nineveh-Hensley-Jackson superintendent Matt Prusiecki tells Indiana Public Media, “we are required to continue to raise our lunch prices by the USDA until we reach that threshold.”

Mikel Livingston reports on a similar situation in the Tippecanoe School Corporation for the Lafayette Journal & Courier, where board members have “reluctantly” voted to raise lunch prices by 10 cents:

“This is a very sore subject with school districts across the country, us being one of them,” said food service Director Lori Shofroth.

“I asked what the penalties could be, and since it is a federally funded program, we could lose our reimbursement and basically that would just sink our program. This isn’t something we want to do. Believe me.”

The State Board of Accounts has already criticized TSC in the past for having too much money in its food service fund, a problem that will worsen only as TSC is forced to continue bumping up the lunch price.

As we’ve previously reported, the USDA is telling schools that are charging less than $2.51 to increase their prices by roughly 3 percent each year until they meet the mandate — all while districts deal with the challenge of meeting federal guidelines that call for more nutritious school lunches.