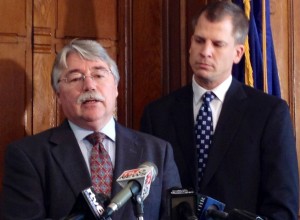 Sen. Pete Miller, R-Avon, is proposing legislation that would provide a grant to school corporations — up to $50,000 funding match — to add school resource officers to their schools.

School resource officers are already present in somewhere between one-quarter and one-third of all Indiana schools.

Miller’s bill would also require that all school resource officers have law enforcement certification and training to work in a school environment. He calls the proposal a first step in addressing violence like the Newtown school shooting.

“No one is suggesting that this is the end-all, be-all to school security,” Miller says.

The proposal, while providing some funding to hire resource officers, would not mandate schools to participate.