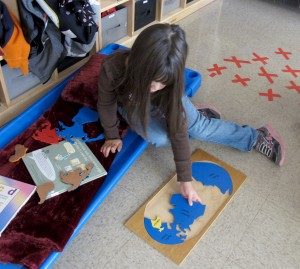 A student works on a map puzzle at Busy Bees Academy, a public preschool in Columbus, Ind.

Lost in the discussion Wednesday of the Indiana Senate Education Committee’s significant change of course on a bill expanding the state’s voucher program was another issue: pre-K.

Members of the Senate panel voted 8-4 that same day to drop a proposal to fund a 1,000-student preschool pilot program in five Indiana counties, replacing it with a plan to expand a state-run rating system for pre-K programs, reports Scott Elliott of the Indy Star.

It’s possible that funding for the pilot could be restored in an amendment later in the session as the bill moves to a floor vote, but the changes to the bill in committee signaled that could be a tough sell.

“It’s never over,” said Rep. Robert Behning, R-Indianapolis, who authored the bill. “I don’t know that the issue is totally dead. But it’s been more difficult than we expected in the Senate.”

Kruse and the bill’s Senate sponsor, Sen. Pete Miller, R-Avon, said they hoped children in preschool could instead be helped by expanding a voluntary four-star rating system for preschools launched by the Family and Social Services Administration in 2008. That program, called Paths to Quality, is aimed at centers that receive a portion of about $170 million in annual federal child-care aid to poor families…

Advocates for early childhood education… had been optimistic at the start of the session that they could break through with funding for the pilot project and at least remove Indiana from the list of states that offer no direct financial support for preschool.

We’ve written before about whether preschool is worth public investment, and if so, how much that investment would cost.