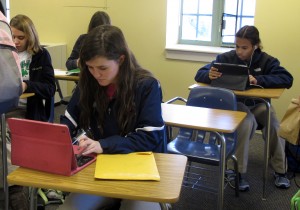 A student works on her iPad during English class at Cathedral High School in Indianapolis.

The House Education Committee heard testimony this morning on a proposal to expand the state’s voucher law. From Indiana Public Broadcasting‘s Brandon Smith:

The state’s current voucher program is available to any student who spends at least one year in public school beyond kindergarten and has an annual income of $64,000 or less for a family of four. Proposed legislation would remove the public school attendance requirement. It would also allow recipients who meet the income requirement when they enter the program to keep their voucher if their family income goes up to as much as $127,000 a year.

South Bend resident Kevin Abbott has three children in a private grade school. He says his family has made difficult financial sacrifices to send them there.

“To be voucher-eligible, our children would have to actually go back to public school, get reenrolled there, be there for year, then we’d have to take them back out at the end and then send them back to our private school,” says Abbott.

But Indianapolis resident Suzanne Felli says, by raising the income requirement and eliminating the attendance requirement, the program would not help those who truly need it:

By removing the public school attendance requirement, HB 1003 would allow students already in private schools to start receiving voucher dollars from the state. The proposal would also allow disabled students, foster children, siblings of current vouchers recipients and the children of active duty military or veterans to receive vouchers, regardless of family income.

The proposal would also increase the amount each student could receive from the state. Currently, vouchers are worth up to $4,500 for students in kindergarten through eighth grade. Students could receive up to $5,500 next year and $6,500 for the 2014-15 school year if the bill passes.

“There were at least three private school groups that offer high quality options for families in other states that wanted to come in, but they couldn’t come in at $4,500,” Friedman Foundation President Robert Enlow told StateImpact last year.

More than 9,000 Indiana students attended private schools with voucher dollars during the 2012-13 school year. A $2,000 increase per voucher would have cost the state an additional $7.6 million, according to the fiscal impact statement.

There’s no cap next year on the number of eligible students who can receive a voucher to attend private school.