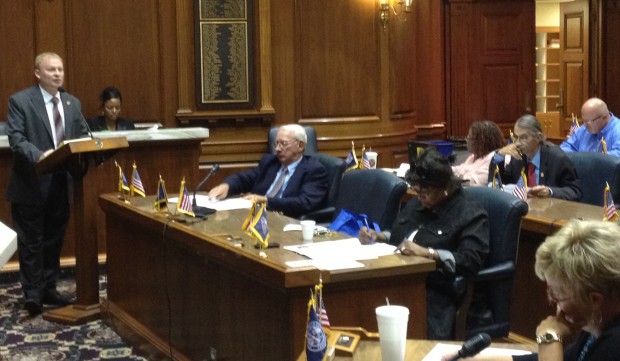 An Indiana lawmaker says the state needs to address the use of seclusion and restraint in public schools, reports Indiana Public Broadcasting’s Brandon Smith.

Sen. Randy Head, R-Logansport, told members of the autism study committee that last year teachers used duct tape to restrain a student with special needs. He says the medical community and advocacy groups agree that students sometimes need to be secluded or restrained. The practice should only be used as a last resort.

But as we’ve noted before, Indiana doesn’t have a law governing seclusion and restraint.

The lastest comes from 2009, when the Indiana State Board of Education urged “… that schools and school corporations address the use of student seclusion and restraint as part of the school’s written discipline rules.”

The Indiana Department of Education permits the use of isolation and restraint as part of a behavioral intervention plan, but only when doing so helps ensure the safety of students and others.

Isolation shouldn’t be used as a form of punishment, though our colleagues in Ohio found students there were often sent to seclusion rooms for minor disciplinary infractions. Offenses included talking back to a teacher and disrupting class.

In 2008, about half of Indiana’s school districts had policies dictating the use of seclusion and restraint, according to a report from the U.S. Department of Education. Of the schools with time-out or isolation room policies, only about a quarter required the district to notify a parent when an isolation room was used.

Cathy Pratt, director of the Indiana Resource Center, says not only does Indiana need a law governing the use of seclusion and restraint, but also teachers need training on how to effectively use those strategies on special needs students.