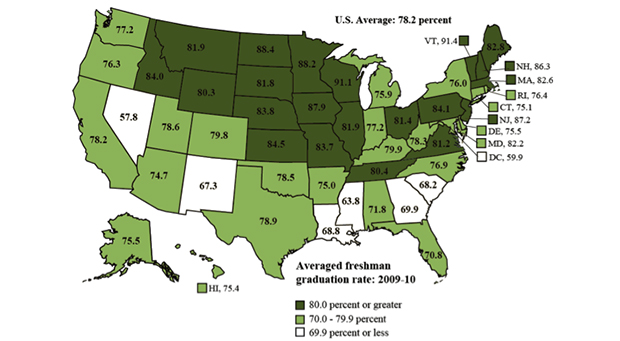 A map from the U.S. Department of Education: "The average freshman graduation rate for public high school students, 2009-10."

78.2 percent of American high school students graduated on time in the 2009-10 school year, which the U.S. Department of Education says marks the highest point in the nation’s graduation rate since 1974.

Indiana’s overall dropout rate, though, is one of the nation’s lowest. For every 1000 Indiana high school students, 1.6 drops out.

A few highlights from the recently-released graduation numbers:

For the 2009-10 school year, state officials calculated Indiana’s graduation rate at 84.1 percent — a disparity, again, due to differences in the way the state crunches the numbers.

Graduation rates are a subject of debate in the Indiana General Assembly this year, as a prominent lawmaker has introduced a bill that would make it more difficult for a student to earn a high school diploma without passing required state tests in English 10 and Algebra I.

By the state’s calculations, excluding students who received waivers knocks the state’s graduation rate from the posted 85.7 percent down to 78.9 percent.