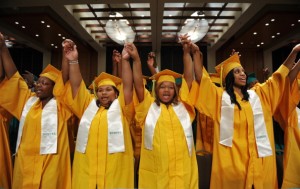 More than 85 percent of Indiana students graduated from high school at the end of last school year — a new record that represents the fifth straight year of increases.

But that doesn’t mean all of them passed the state tests they’re supposed to pass in order to earn their diploma.

Indiana schools are allowed to give waivers to students who fail “end-of-course assessments” all students technically must pass to graduate. Students receiving waivers can still earn their diplomas even if they don’t pass year-end exams in math and English before they finish school.

If you count those students, as state officials do when calculating Indiana’s “statutory graduation rate,” 85.7 percent of all students graduated from high school in four years.

But state officials also calculate a graduation rate that excludes the students who are given a free pass — the “non-waiver graduation rate,” which increased from 78.1 percent to 78.9 percent last year.

With this year’s increases, Indiana’s moving closer to state superintendent Tony Bennett’s goal that 90 percent of students finish school in four years. But how many of the state’s schools meet this threshold?

Looking only at the state’s statutory graduation rate, 131 of Indiana’s 292 districts currently meet that goal. By contrast, only 51 districts have non-waiver graduation rates above 90 percent.

Department spokesperson Alex Damron says the difference between statutory and non-waiver graduation rates have grown only slightly over the past few years. He says the state’s current non-waiver rate is not cause for alarm, but that “we should be having a discussion” about whether the use of waivers is appropriate.

Scott Elliott adds at The Indianapolis Star‘s Get On The Bus blog:

But, again, some of those gains were being fueled by waivers. Statewide, 81 schools had more than 10 percent of graduates receiving waivers in 2009-10. Last year that number jumped to 103 schools…

Factors playing into that trend include pressure on schools to achieve good state ratings, the difficulty of new high school end-of-course exams students are required to pass, and the use of alternative programs that aim to keep kids in school by letting them make up credits on the side.

But administrators at Indianapolis Public Schools — which has a statutory graduation rate of 64.5 percent and a non-waiver graduation rate of 47.3 percent — say waivers are a powerful tool in acknowledging the difficulty some students face in succeeding in school.

“I’m not going to apologize for waivers,” IPS superintendent Eugene White told The Indianapolis Star. “We do all we can to help children find ways to get a high school diploma. With all their situations and baggage, to get a diploma in four years can be challenging.”