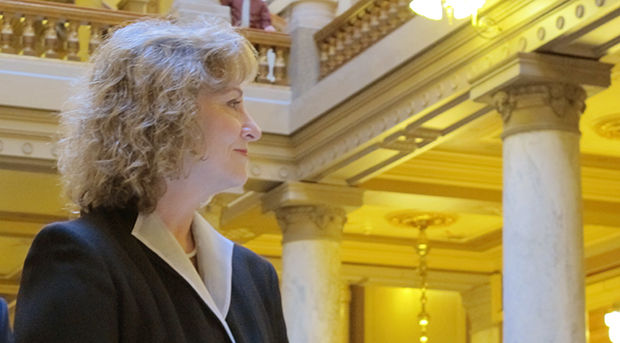 Superintendent of Public Instruction Glenda Ritz at her inauguration ceremony at the Indiana statehouse.

Glenda Ritz faced down long odds in unseating a well-funded incumbent Superintendent of Public Instruction Tony Bennett, who outspent her five-to-one in the campaign.

As the first Democrat in nearly four decades to win Indiana’s top elected education post, Ritz’s next challenge is equally steep: navigate the tricky politics of the Republican-controlled statehouse.

“The waters are likely to be choppy and a bit turbulent,” Ritz’s chief of staff Craig Hartzer told StateImpact after her first week on the job. “But I’m very confident the new superintendent will be able to put her positions forward in a very persuasive way.”

Though the path before Ritz is still fraught with pitfalls — lawmakers are still pondering two proposals that would limit Ritz’s powers — even some conservatives say Ritz has started off her second term on the right foot.

“She needs to set her agenda. She needs to get out front on these issues and say ‘I’m for, I’m against—’ or what exactly her position is, and not let that be defined by others.”
—Larry Grau, Indiana Democrats for Education Reform

Senate Education Committee Chair Dennis Kruse, R-Auburn, said Wednesday his panel would not hear any bills “that reflect in any way against our new superintendent.”

“There’s a difference between those people who would be on staff and say ‘We don’t like this, we’re not going to talk with you,’ and those who are saying, ‘Okay, we understand we have a duty to implement this program, let’s talk about how to do this reasonably.’ It sounds like there are some people we’re going to be able to talk to, and we’re excited about that,” says Enlow, the president of the Friedman Foundation for Educational Choice.

‘People Voted For Ritz Because She Wasn’t Tony Bennett’

Gov. Mike Pence hinted at opportunities for cooperation with Ritz in his State of the State address Tuesday, saying his administration “will work with our new Superintendent of Public Instruction to cut the red tape that teachers face in the classroom.”

But Pence has also said his administration will defend education policies enacted under Bennett’s and former Gov. Mitch Daniels’ watch.

“I think a lot of people voted for [Ritz] because she wasn’t Tony Bennett,” says Jay Kenworthy, communications director for Stand for Children Indiana. He says the advocacy organization is willing to work with Ritz, but added that he’s “encouraged” by Pence’s promise to keep Bennett’s education policy overhaul intact.

“In general, Republicans in Indiana get it, and they will continue to march forward on what’s right for kids,” Kenworthy says.

But Warren Township school librarian Susie Highley says many teachers felt antagonized during Bennett’s years in office, saying she hopes Ritz will focus on the positive.

“I hope the tone will change from ‘All these awful bad teachers, we’ve got to get rid of these bad teachers’ to ‘How do we support the teachers we have?’ and ‘Lets look for the good things they do and if there’s something we need to work on, let’s do that.’ I got tired of hearing the bad teachers were the root of a lot of the problems,” Highley says.

During her campaign, Ritz railed against the state’s voucher program, which she says siphons vital dollars from public schools. She criticized teacher evaluations she calls too punitive. She bemoaned a statewide school culture she saw as too test-focused.

Now, Enlow says Ritz has to work with Republican supermajorities in the General Assembly while still chalking up wins for her campaign’s supporters.

“She’s going to have to deal with the fact that she got elected by a group of people who have a very clear agenda in their mind,” Enlow says. “The question is what can she deliver for that group of people over the next four years. Between those two things will be the determining factor of how well she does and whether she continues in that office.”

But Ritz has brought on two former Democratic state lawmakers — Scott Reske and John Barnes — as legislative liaisons to assist her in working with the General Assembly.

Hartzer, a former aid to the late Gov. Frank O’Bannon, says the new superintendent is trying to foster relationships with lawmakers built on mutual respect.

“It’s a matter of having respect for their opinion and hoping they’ll have respect for our opinion and nobody has a better idea about how K-12 education works or should work in our state than the new superintendent,” Hartzer says.

‘She Needs To Get Out Front’

The Ritz administration decided against setting a formal legislative agenda for this session. A department spokesperson points out it has been forty years since the state superintendent’s office switched parties, adding the new superintendent would prefer to spend at least this session finding common ground with lawmakers. 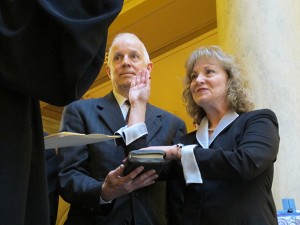 Indiana Democrats for Education Reform executive director Larry Grau says he would like Ritz to better define where she stands on issues the General Assembly is considering — as she did on the Common Core proposal.

“She needs to set her agenda. She needs to get out front on these issues and say ‘I’m for, I’m against—’ or what exactly her position is, and not let that be defined by others,” Grau says.

“Is she capable of doing it? From everything I hear, yes,” Grau says. “She’s certainly surrounding herself with the kind of people that will help her in doing that.”