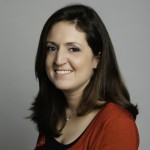 Kathleen Porter-Magee studies the state academic standards for the Fordham Institute, an education policy think tank that generally supports vouchers, charter schools and the implementation of the Common Core State Standards. (We wrote about that last week.)

She, like many education policy wonks, has her reservations about the Common Core. She worries the new standardized tests that come with the nationally-scaled set of standards will set too low a “minimum bar” for students to make a difference.

But Porter-Magee is also concerned about those who are trying to minimize the importance of the Common Core. She spoke to StateImpact earlier this month. I excerpted our conversation below the jump:

Q: Is it the generally-accepted view that the Common Core is a more rigorous set of standards?

A: In comparison to the previous set of standards, absolutely. I will say that Indiana had a set of reasonably good standards prior to the adoption of the common core. So in Indiana, there will be an increase in rigor, but I think the shift will have more to do with a changing of focus areas and priorities. There are some states that had very, very poor standards in place prior to Common Core standards, and those states will have a much bigger leap to align with what the Common Core now demands.

“When I think of standards as a minimum, it’s not because I think they should be minimized.”
—Kathleen Porter-Magee, Fordham Institute

Q: Indiana state superintendent Tony Bennett has said the PARCC assessments — the statewide tests based on the Common Core that will replace the ISTEP exam in 2015 — will be “harder” than our current exams. Is that accurate?

A: That remains to be seen. PARCC has not released all that much information yet… What’s happened too often in standards implementation prior to the Common Core is that the standards themselves were not rigorous or state tests were okay, but proficiency cut scores were too low to be meaningful, so what we’re hoping will shift with the common core assessment is that the test will be rigorous and very high quality, but also, the test score will more accurately reflect whether students were on track to being college and career-ready. I suspect what Dr. Bennett is suggesting is that Indiana hasn’t done that with the ISTEP, and that’s the biggest change that’s coming down the pike with the Common Core assessment.

Q: When some policymakers try to allay criticisms about state tests, they sometimes downplay the standards on which those tests are based (e.g. ‘We’re only asking students to meet minimum requirements’). But Common Core supporters say that raising the ‘minimum bar’ the standards set will somehow make maximal differences. Does that strike you as contradictory?

A: When I think of standards as a minimum, it’s not because I think they should be minimized. What it does is it says, as a school, your challenge is to understand where your students are and then to figure out if you have a serious problem where you need to remediate large portions of your population, that’s a serious challenge. Having worked in schools where that is one of our biggest challenges and it’s not only the most fun part of teaching — it is hard. Once you get students on grade-level achievement, for lack of a better word, then you can start having interesting conversations about where you go next. But the whole ‘where you go next’ conversation before you even assure that students have those common baseline schools and that common baseline knowledge seems like it’s harming students more than we’re helping them.

When I think about standards setting the minimum, I think it says, “Look, we all agree that we want students to be going above and beyond, but before you go above and beyond, you have to reach above an accepted minimum standard.” If you haven’t gotten there yet, the whole conversation about “What else?” is premature. You’re not ready to read a book unless you know the letters, that letters make words, and words make sentences. I’m obviously focusing on something like kindergarten in this case, but there’s so much knowledge and so many skills that we take for granted that we need to make sure we’re deliberately teaching students who haven’t had the advantage of some of their peers.

(Magee says there are those who do seek to minimize the importance of standards, however.)

I certainly don’t blame the teachers for this because they’re getting so much different information thrown at them right now. On the one hand, you have organizations like Fordham saying this is going to be an enormous shift. But on the other hand, you have some curriculum and professional development providers that are basically suggesting that if you just follow the same tactics that they’ve been promoting for years, they’ll be aligned to the Common Core. The two messages are wildly different, and from the teachers’ perspective, I can understand why the teachers would be left thinking, ‘Well, which is it? Is it different or is it the same?’

I’m not saying that teachers need to fall in line because having been in the classroom myself and knowing what it feels like, the difference between having something shoved down my throat and being a partner in an effort to get something done — that distinction is real. I think that’s where leaders need to come in and make sure that teachers need to make sure they are partners in trying to get this done. I do believe that if leaders come in and say, “Just do as I say,” that could really threaten Common Core implementation because it can lead to the minimization that we were just talking about.

What do you think of Porter-Magee’s arguments? Do you think the Common Core is a big deal — or has its importance become inflated?