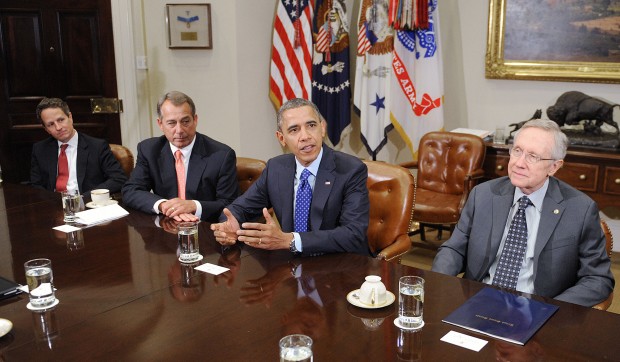 President Obama and Congressional leaders from both parties sounded optimistic last week when they began negotiating how to avoid a plunge off the fiscal cliff. But at least one Indiana superintendent says his district is already preparing for the worst — an automatic, across-the-board 8.2 percent reduction in federal spending triggered by sequestration.

“You have to begin to make your contingency plans,” Mishawaka Superintendent Terry Barker told StateImpact. “What if this situation happens? Can we weather the storm temporarily, can we ride out the rest of the year? Then we’re going to have to tell people in the spring, ‘Sorry, you don’t have a job for next year.'”

According to projections from Ed Money Watch, Mishawaka stands to lose a little over a million dollars in federal funding if the cuts kick in. That’s about 1.27 percent of its overall budget. We’ve reported before that no Indiana school district is likely to lose more than 3 percent of its total revenue.

Still, it’s not exactly chump change. Even though most federal grant programs are forward-funded — that means the cuts won’t take effect until the 2013-14 school year — Barker estimates his district could face a $400,000 shortfall early next year.

“That’s seven and a half teachers,” he says.

Superintendents aren’t the only ones keeping busy with sequestration math. Programs like Head Start that rely almost exclusively on federal funding to operate will take an immediate hit come January. Indiana Head Start Association Executive Director Cheryl Miller says she’s hoping for the best because it’s going to be difficult to prepare for the worst:

When they tell us we would see about 1,100 children less, that’s really not accurate because what’s going to happen is programs are still going to be committed to serving the number of children their grant says they’ll serve. It’s great in that we’re not going to cut slots immediately, but the impact is the very small amount of money they have in their program that they can kind of manipulate, that’s where that close to 10 percent is going to come.

So we hear directors are probably going to have the cut the weeks of service they provide to families. Obviously if you shut down earlier than what you’re planning on shutting down, a lot of those expenses will stop accruing. We have programs that have cut transportation completely out or really downsized it to a point that a lot of families that have problems getting themselves or their children anywhere are faced with the prospect of no bus coming to get the Head Start children.

About 15,000 children receive services through Head Start in Indiana. Miller says most programs in the state have already trimmed their budgets. “Now we’re cutting into bone,” she adds.

Len Jozwiak is vice president of Geminus Corporation, which oversees Head Start programs for about 1,300 kids in Lake and Porter counties. He’s looking at a million dollar shortfall if Congress can’t reach a deal.

“So they’re expecting we would go through the entire budget, looking at all other kinds of options and reduce other kinds of things before recommending any reductions in services to children or parents,” says Jozwiak.

Eight years ago, when Jozwiak started at Geminus, about 60 percent of the kids in Northwest Indiana who qualified for services attended a Head Start program. The latest needs assessment identified about 6,000 children who would be eligible. Jozwiak blames the economy.

“It’s much more bleak than that today,” he says.

School Boards Hope To Send A Message To Congress

Mishawaka Superintendent Barker points out that the automatic spending cuts would be coming at a time when many schools have already dipped into their reserve funds to make up for dwindling revenue.

That’s why last month Barker asked the Mishawaka School Board to pass a resolution urging Congress to reach a compromise before sequestration triggers the cuts in January. According to the National School Board Association, three other school districts in the state have passed similar resolutions.

“If you’ve made a promise of funding, and you’re going to take about 8.2 percent of that funding, that’s an impact on us,” says Barker. “We commit to programs, we commit to services to kids and to staff in hiring that now if we don’t receive the full funding that was originally allotted, we have to make that up, or I have to let people go.”