We’re starting to get a better understanding of what’s at stake for Indiana students — from elementary school through college — if federal lawmakers cannot reach a deal to avoid more than $600 million in automatic budget cuts and tax hikes awaiting them at the the bottom of a “fiscal cliff” they’ll hit at year’s end.

As we wrote in September, if lawmakers fail to reach a deal to stop the automatic cutting, called “sequestration,” one analysis has shown Indiana K-12 schools stand to lose a total of more than $114 million in federal funding.

University research funds and higher education incentives could be stripped down by more than $13 billion, leading to more out-of-pocket costs to attend college and pay back loans for students.

Faculty could be forced to lay off assistants or slim down labs.

And that is not even including decisions further down the road needed to keep billions of dollars for student aid.

Tim Sanders, Purdue University’s associate vice president for governmental relations, said even if Congress can agree to spare a program from the cliff, another will be cut deeper to make up for it. As Purdue and other universities remind lawmakers how slashes could cripple innovation, so is every other industry and interest group…

“If you are a research university like Purdue or Indiana University, such a cut would have an immediate impact on current research activities and the future research possibilities,” [said Terry W. Hartle, senior vice president for government and public affairs at the American Council on Education]. “Would they cut what they have now, or limit the future? No one is saying.” 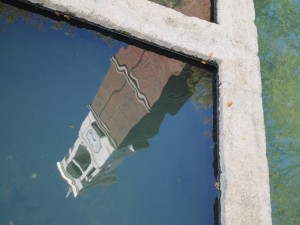 The Purdue Bell Tower shown in a reflecting pool on the West Lafayette campus.

While the impact to federal student aid programs is minimal, Weddle writes, the cuts do impact tax credits for families shouldering college costs.

As a sidenote, a study released Monday showed the average Indiana family would pay more than $3,600 in additional taxes if lawmakers are unable to avoid the fiscal cliff.

The Pew Research Center put out survey numbers Tuesday showing two-thirds of Americans fear “major effects” to the economy should the president and lawmakers fail to reach a deal. Fifty-three percent of those Pew surveyed would blame Congress if a compromise isn’t struck, while 29 percent would blame President Obama.