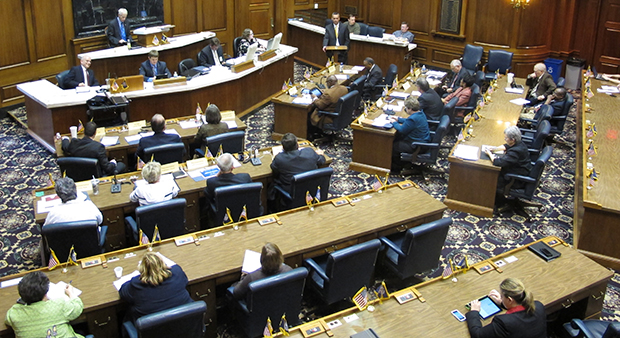 Lawmakers listen to a speech by state superintendent Tony Bennett on the floor of the Indiana House of Representatives. He was speaking during the first meeting of the Select Commission on Education.

Here’s one way to frame what’s at stake in the races for the state legislature:

On education policy, do voters want the General Assembly to have an active year like 2011 — like the 2011 session, when lawmakers passed the state’s voucher program, a teacher evaluation mandate and new charter school rules into law?

Or do voters want state lawmakers to slow the pace of Indiana’s education overhaul?

The idea of “slowing down” doesn’t sit well with at least one candidate: Fishers Republican Todd Huston, who’s running unopposed for a seat in the Indiana House.

“We know we have to change education,” says Huston, a former chief of staff to state superintendent Tony Bennett. “We have to be much more aggressive in our thought. The idea that we would pause strikes me as almost inconsistent with what you see at both a national and international level about what it’s going to take for our kids to succeed.”

While determining what’s ‘speeding up’ and ‘slowing down’ is, of course, a matter of perspective and word choice, not even every member of Huston’s party is as keen on another year as active as 2011 in education policy.

But Kruse says “slow” doesn’t mean there won’t be discussions about potentially impactful legislation. He says the Committee will likely consider Bennett’s proposal to shorten the timeline the state uses to determine when to intervene in schools with chronically low test scores — even if the legislature doesn’t create a timeline for district-level takeover.

‘We Need A Pause’

Although there are exceptions, Democratic General Assembly candidates are less likely to support the Republican-led changes. But the electoral math works against Democrats, whose changes of regaining control of either the state’s House or Senate are slim.

But Democrat Jeff Sparks — a middle school principal challenging GOP incumbent Matt Ubelhor for his state House seat — says if his party can flip a few seats, they can send a message to Republicans. 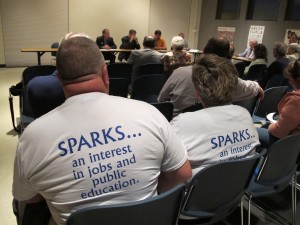 Supporters of Jeff Sparks, a Democrat running for the Indiana House seat currently held by Republican Matt Ubelhor, listens to a panel of candidates for the Indiana General Assembly at a public library in Ellettsville.

“I’m certainly hoping at the minimum we slow [the pace of education overhaul] down,” Sparks says.

Sparks says current policy is not fair to teachers.

“There’s not a teacher in the state who doesn’t agree that we need to be accountable,” Sparks says, “but the manner in which it’s been approached has been purely punitive.”

“We need a pause. You have to evaluate. Some programs may be good. Some programs aren’t so good,” says Mann, a social studies teacher at Terre Haute South Vigo High School. “You need to re-evaluate every step of the way.”

‘We Must Listen To Educators’

Huston views education and economic development as interrelated. He worries that slowing the pace of changes to education will leave Indiana schools at a disadvantage.

Huston, currently a Senior VP at the College Board, says educators must remake the high school day to catch up with evolving technologies and methods. But he says that takes work on the part of educators and lawmakers. Huston says that also means the General Assembly cannot stop working after broadening school choices, placing more emphasis on accountability for statewide test scores and implementing a statewide teacher evaluation mandate. 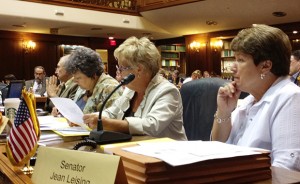 But the question of Tuesday’s election may be how many Republicans share Huston’s view on education policy. While Republicans spearheaded the sweeping changes of the 2011 session, at least one lawmaker expressed doubts about how the new laws were being implemented.

In May, Rep. Randy Truitt, R-West Lafayette, sent a 10-page letter to both Sen. Kruse and House Education Committee Chair Bob Behning. While Truitt didn’t back down from his support of changes to education policy, he expressed deep concerns about the new laws’ implementation. The Lafayette Journal & Courier has Truitt’s letter:

There is a concern from our local educators and our community that policies and procedures from the IDOE are not school friendly (no day requirement for students taking the IREAD). I continue to see our community and education leaders testify in Indianapolis on a regular basis and see very little movement on the topics at hand. It is my desire that all of us really think about what we are trying to accomplish and that we listen to those who are doing the work every day with very little thanks from those of us who are making all of these changes.