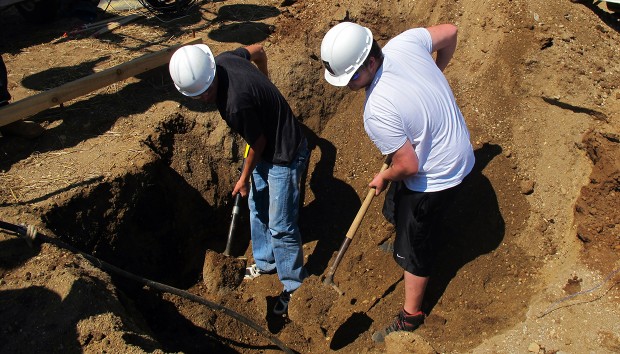 Students in the C4 Columbus Area Career Connection building trades program dig a foundation for a out building on Aug. 30, 2012. Students work on one large-scale construction project each year — usually a house —€” but this year theyâ€™re building a new baseball complex for the Bartholomew School Corporation.

It’s just after 2 o’clock on a Thursday afternoon. The sun is high in the sky, and the construction workers digging the foundation of a storage building at Columbus North High School’s new baseball field are about to call it a day.

But once they’re done, they’ll board a yellow bus and go back to school. That’s because the workers at this construction site are high school students.

Both major party gubernatorial candidates are calling for Indiana high schools to bring back vocational training. Yet most Indiana school districts already have robust career and technical education programs — and they’re not just for students preparing for college.

Why ‘Vocational’ Isn’t The Right Word For Today’s Programs

Mike Pence and John Gregg both say Indiana schools need to prepare students for the workforce, not just college. So vocational education has become a buzzword in the governor’s race. But according to the director of one career and technical education program, that terminology is out-of-date. 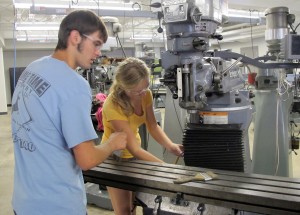 Students repair a broken machine during a C4 Columbus Area Career Connection class on Aug. 30, 2012. Part of the machine trades curriculum is learning how to fix the equipment they use in class every day.

Hack used to teach in the school’s building trades program before taking an administrative position in the Bartholomew School Corporation. He says using the word “vocational” minimizes the skills taught in career and technical education.

“Like our students in our precision machining trades, they’re learning a lot of computer and numerical control,” he says. “Our automotive students, a lot of it’s computer-based now. It’s diagnostic. It’s computer-based stuff. It’s not grease up to your elbows.”

Students enrolled in C4 classes can receive instruction in everything from culinary arts to dental hygiene to 3D animation. Four counties — Bartholomew, Brown, Decatur and Jackson — participate in the program, and most classes are offered at one of the two Columbus high schools. That means the majority of students can walk down the hall and pop into their C4 class without having to travel off-site to a career and technical training facility.

How Career And Technical Education Gives Students A Leg Up

One of the fastest growing programs at C4 is engineering. Those classes are part of Project Lead The Way, a push to prepare more students for careers using math and science.

Columbus North High School senior Seth Reisinger wants to study electrical engineering, so he’s been taking C4 engineering classes for two years. Last year he built a GPS data logger that tracked things like speed and trajectory — of flying fruit, that is. Students then launched a pumpkin out of a cannon at the local farmer’s market.

This year Reisinger’s schedule is a little different. He spends the morning taking classes at the high school, but he spends the afternoon interning at Cummins, the diesel engine manufacturer in Columbus.

Reisinger says the real world experinece he’s getting at Cummins will give him a leg up when he applies to Purdue or MIT. But if he wanted to go straight to work after high school, he’d also have a competitive advantage.

Steve Mackey acts as a liaison between Cummins and schools with programs like C4 to make sure they’re delivering students with skills companies can use.

“If a hiring manager has need for someone doing data analysis in engineering, we’ll come to the school and say, ‘Do you have someone in Project Lead The Way?’”

Of the 200 students who have participated in a school-to-work program at Cummins in the last five years, 40 have gone on to full-time positions with the company. Mackey says they’re given a hiring preference as recognition of the skills they’ve gained in career and technical education programs.

Once they’re employed at Cummins, they qualify for tuition reimbursement.

Whether C4 students are headed to a four-year college or straight into the work force, Hack wants them to start thinking about their next step when they’re still in high school. 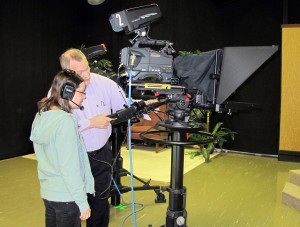 Don Baker, the TV instructor at Columbus East High School, shows a student how to run a camera. Students produce a live morning show at the end of first period each day that is broadcast at the school and throughout the community.

Indiana now offers a technical diploma for students who achieve honors while pursuing career education. In 2010, about six percent of Columbus graduates earned the distinction, compared to one percent statewide.

Hack says that doesn’t mean students from Columbus are entering the workforce sooner than graduates elsewhere in the state. Nearly a fifth of C4 students that year also earned an academic honors diploma.

In an exit survey, about 60 percent of C4 graduates told the school they planned to continue their education. Half were pursuing fields of study or employment related to their high school training.