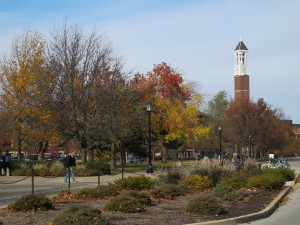 The Morrill Act allowed the Indiana General Assembly to establish Purdue University in 1869.

The Federal Reserve Bank of New York’s blog, Liberty Street Economics, had a pair of interesting posts this week about soaring college costs. (We recapped the first one here.)

But here’s another way to look at state budget cuts: With tuition rising as public funding falls, economists question if land-grant universities — created to increase access to higher education — are still serving their mission:

The revenue crunch has forced public institutions to seek alternative avenues for funding. For one, they have resorted to shifting more of the costs of education to students. Our recent post finds an economically significant relationship between public funding cuts and public institution tuition hikes. In fact, in the post-recession period, the states with the deepest funding cuts were also the ones with the highest growth in tuition. For the average student, this translates to ever-increasing student loans and potentially larger debt burdens.

The Morrill Act turns 150 this year, and to celebrate its sesquicentennial, Liberty Street Economics isn’t the only blog reflecting on how a century and a half has changed public higher education.

Writing for The Hechinger Report, Jon Marcus describes a nation divided at a time when only the wealthy could afford the full price of college. But he’s not talking about today. He’s talking about 1862, when President Abraham Lincoln signed the Morrill Act at the height of the Civil War:

The idea was to make college practical and democratic, when at the time it consisted largely of the classics taught to the elite in the original Greek and Latin.

But today, in yet another polarized, financially unstable time, state appropriations per student to public universities have fallen by almost 25 percent in the last 10 years. That has sent tuition up an average of nearly 6 percent per year above the rate of inflation during that time. Where states covered two-thirds of the cost of education at public universities just 20 years ago, they now pay only one third, and students and their families are having to pick up the difference.

The Morrill Act built colleges that taught trades like engineering and agriculture, fields Indiana’s only land-grant university, Purdue, is still known for today. In fact, many of the nation’s top schools — MIT, Cornell, the University of California at Berkeley — are land-grant universities.

Tuition is up at all those institutions, notes Christopher P. Loss for The Chronicle of Higher Education. Loss traces the evolution of the Morrill Act from its politically-charged beginnings (its author, Justin Smith Morrill, seized on the succession of the Confederacy as the perfect time to offer large, landed endowments to loyal, Union states) to New Deal building projects that expanded campuses in the 1930s.

“By the 1970s college had become a reachable goal for millions of Americans, including underserved populations who flocked to the booming land-grant institutions,” Loss writes. Yet college is less attainable today than it was 30 years ago:

… the old consensus around higher education as a public good has withered away. Three decades of regressive tax policies, capped by four years of acute economic crisis, have left the sector reeling. Plummeting state-level support, which dipped below 8 percent nationally last year, has exacerbated the impact of rapidly rising costs, shifting an ever greater financial burden onto students and families.

An overwhelming majority of the 4.6 million students at land-grant universities rely on some form of financial aid to attend school. But Loss, an assistant professor of public policy and higher education at Vanderbilt University, argues that college is still worth the investment. (That tracks with an increasing body of research that suggests post-secondary graduates are more likely to be employed than peers who didn’t continue their education after high school.)

So what can we learn from the Morrill Act? From Liberty Street Economics: