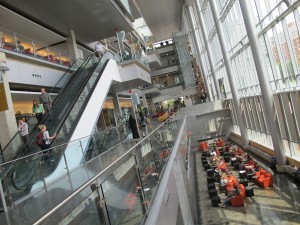 Our analysis suggests that public schools are increasing tuition as a way to make up for decreasing state and local appropriations for higher education, and that deeper cuts in public funding may be associated with correspondingly greater tuition hikes…

This finding is troubling, since public universities and colleges may face even greater financial strain in the years to come as ARRA federal funding shrinks. For the college student, this means shouldering more of the financial burden, including the possibility of taking out ever larger student loans.

It may seem like an obvious connection — more state budget cuts equal more students shouldering the burden in the form of tuition — but the statement is part of a much more complicated debate about what’s causing the cost of college to soar.

We’ve written in the past about a related, but different hypothesis: Making government financial aid available to more students essentially enables universities to raise tuition over the long run. That’s because, the argument goes, colleges know students will always be able to take out a federally-backed loan to shoulder the cost.

Officials at Indiana’s public colleges say they’ve had to deal with declining state appropriations. But some state lawmakers argue that decline is a matter of “perspective.”

Which theory do you buy?