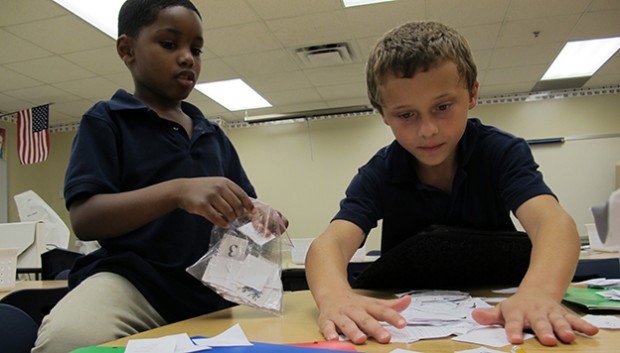 Two Indiana second-graders at Christel House Academy, a school where almost every student receives free or reduced price lunch. According the most recently-available numbers, the school is roughly 20 percent black, 30 percent Latino, and 40 percent white.

After the recent release of a study about race and American public schools, the headlines in news outlets from Ed Week to The Huffington Post have been pretty grave. Here’s The New York Times‘ lede:

Whites are still largely concentrated in schools with other whites, leaving the largest minority groups — black and Latino students — isolated in classrooms. The report showed that segregation is not limited to race: blacks and Latinos are twice as likely as white or Asian students to attend schools with a substantial majority of poor children.

Indeed, in Indiana, 86 percent of the typical white student’s classmates are also white, according to a study from UCLA’s Civil Rights Project. White students make up 77 percent of the state’s student population.

But the story of race and segregation in Indiana schools, the numbers suggest, is complicated.

Here’s what the study says about Indiana:

Making sense of these numbers is tricky, so here are a couple of points to keep in mind.

From The New York Times:

Other advocates for minorities said charter schools had benefited their communities, even if they were not racially integrated.

Raul Gonzalez, director of legislative affairs and education policy at the National Council of La Raza, a Latino advocacy group, said that black and Hispanic parents did not necessarily say “I want my kid to be in an integrated setting.” Instead, he said, “they’re going to say I want my kid’s school to do better than what it’s doing.”

The report’s authors contend, however, that a focus on integration is necessary to improve schools, as a correlation exists between poor, high-minority schools and resource issues like less experienced and less qualified teachers, high teacher turnover rates and lesser facilities and lesson materials.

Desegregation in the nation saw an increase from 1960 through the late 1980s, and then changed course. In 1991, Oklahoma City v. Dowell “made it easier for school districts and courts to dismantle desegregation plans,” according to the report. That ruling took a heavy toll on the South in particular, where school re-segregation is happening most dramatically among African-American students, says the report.

That ruling had a direct impact on Indiana schools as well. From a 2004 Indy Star article:

Court-ordered busing in the 1980s was so effective at IPS School 87 that the student body was a near-perfect racial mix.

Today, nine out of 10 students are black, and diversity is something that’s taught and not seen.

Monday is the anniversary of the U.S. Supreme Court’s landmark Brown v. Board of Education decision that struck down “separate but equal” schooling 50 years ago. Yet, 33 years after Indianapolis Public Schools began busing for racial balance, the city’s schools are nearly as segregated as they were in the early 1970s.

What do you make of this survey and its conclusion? How should we read it here in Indiana?