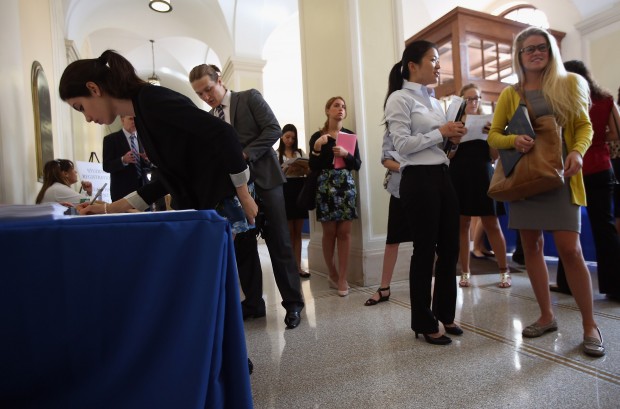 College students register for a job fair in New York City on Sept. 7, 2012.

College graduates and those age 25 to 54 are the most likely to hold full-time jobs, according to the latest Gallup poll.

The Gallup data tracks with research from the Lumina Foundation and Georgetown University’s Center on Education and the Workforce, which found workers with less education lost four out of five jobs during the recession.

Writing for Gallup’s Economy blog, Lymari Morales calls education a “key predictor” of full-time employment. Americans with a high school education or less had a low payroll-to-population rate and were more likely to be underemployed or out of the workforce, she says:

Perhaps the clearest sign in these data is that more education translates to higher workforce participation rates and higher P2P [payroll-to-population] rates. As such, increasing the percentage of college-educated Americans may be critical to increasing the country’s P2P rate to a measurable degree — and in turn pushing the economy forward in a sustainable way. A potential silver lining in the country’s economic struggle is that if a significant number of workers have left the workforce to pursue more education over the past several years, those individuals will be poised to foster positive gains in the future, both for themselves and the economy, provided they are able to secure full-time jobs.

An increasing body of research refutes the argument that the recession has diminished the value of a college degree. But there’s also evidence that what you studied in college is more important than ever. The latest from the Indiana Business Research Center confirms a strong link between college major and periods of prolonged unemployment.