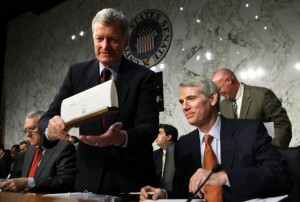 Committee members Sen. Max Baucus (left, D-MT) sets his name plate up as Sen. Rob Portman (R-OH) looks on during a hearing before the Joint Deficit Reduction Committee, also known as the supercommittee, September 13, 2011 on Capitol Hill in Washington, DC.

For the Congressional supercommittee, failure is not an option, right?

President Obama said it himself, didn’t he? If the supercommittee doesn’t agree on budget cuts to reduce the nation’s deficit, $1.2 trillion in budget cuts — including $3.5 billion to federal education programs — would kick in automatically.

Or would they? Jason Delisle, director of the New America Foundation’s Federal Education Budget Project and former House budget committee staffer, says Congress could “just turn off” the automatic cuts.

“We all think of [budget rules] like they’re the Constituition, but they’re just laws,” Delisle says, adding, “Congress can just change them at any time.”

Now wait a minute: Aren’t there deficit hawks — mainly Tea Party Republicans – who have a political stake in seeing either the deficit reduced, or the automatic cuts (known as “the sequester” or “sequestration” in budget lingo) enforced?

You could imagine this sort of brinksmanship that goes along with that… Obama says, ‘Okay, House Republicans, if you won’t vote to turn [sequestration] off, then I won’t extend the Bush tax cuts.’ You’d have [a situation] just like you did in December of last year where the bill to extend all the 2001 tax rates also included all sorts of new spending. You can see the same thing, where we turn off the sequester, for an extension of tax rates.

On the surface, though, Delisle says there may be some value to having a closed-door supercommittee politically empowered:

The concept of the supercommittee was really successful in terms of getting everybody excited about doing something. But it’s still the same members of congress operating with the same rules and the same policy options, so the policy options haven’t really changed. They’ve tried to change the scenery on it a little bit, and maybe by changing the scenery, some of those members of congress are more willing to agree on things.

Delisle isn’t alone. As the Huffington Post wrote in September:

The most likely scenario: The super committee locks up along partisan lines and, after the 2012 election, bipartisan negotiators deal with the tax cuts and the super committee’s sequestration cuts, along with a basket of other expiring provisions, in one set of negotiations. Democrats will be pressured by the coming sequestration, while Republicans will be motivated by the expiration of the Bush tax cuts. And all of their negotiations will take place in a political and economic climate impossible to predict today.