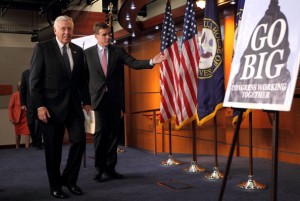 Democratic Rep. Steny Hoyer (left) and Sen. Mark Warner arrive for a news conference on Capitol Hill, calling on the Select Committee on Deficit Reduction — the "supercommittee" — to "go big on deficit reduction."

President Obama’s tough line on the inability of the Congressional supercommittee to reach a deal has thrown something like $3.5 billion in federal education funding into a budgetary limbo.

Barring some move to defuse the ‘automatic’ cuts the supercommittee’s failure triggered, the loss of that funding could hit schools with high levels of at-risk students especially hard.

The cuts would likely carve $1.1 billion out of Title I, a federal program designed to help disabled and disadvantaged students.

In Indiana, money from that program is concentrated in just a handful of districts.

Indiana school districts received a total of $234 million in Title I money. Nearly half of that funding, though, is allocated to roughly one-tenth of the state’s 291 school districts — generally those with high poverty rates, such as Gary (listed as “38.6 percent poverty”), Indianapolis (30.4 percent) and Fort Wayne (18.2 percent).

The 10 districts with the highest Title I funding amounts (listed in the chart on the right) account for $87.3 million — about 37 percent of the state’s total award.

How big are the cuts Title I faces? If the automatic cuts kick in on Wednesday, then the Title I program would likely lose out on what amounts to 7.5 percent of its FY2011 appropriation. The cuts wouldn’t kick in until FY2013.

But remember — there’s always the possibility that Congress could later restore the funds the automatic cuts would take away.

“We all think of [budget rules] like they’re the Constituition, but they’re just laws,” Jason Delisle of the New America Foundation told StateImpact three weeks ago. “Congress can just change them at any time.”

President Obama signaled at a Monday news conference it won’t be as easy as Delisle suggests. From the AP:

“There will be no easy off-ramps on this one. We need to keep the pressure up to compromise, not turn off the pressure,” the president said. “The only way these spending cuts will not take place is if Congress gets back to work and agrees to a balanced plan to reduce the deficit by at least $1.2 trillion.”