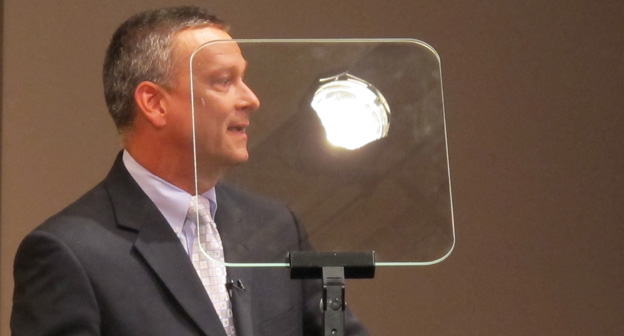 Tony Bennett says former Florida Gov. Jeb Bush has been a friend and an ally in his …

Although many states have modeled their own education initiatives after Jeb Bush’s Florida policy, few have embraced the former governor’s blueprint as fully as Indiana. But now that the results are in for the state’s first round of high states testing, State Superintendent Tony Bennett can breath a sigh of relief: Indiana students did much better on the IREAD-3 this spring than Florida students did when the FCAT was first administered in 2003.

“It was a pretty traumatic time,” Bush told StateImpact Florida. “And what happened was the system changed. It really did require that you teach children differently so that they could learn how to read.”

Bush has become a resource for other states transitioning to high stakes testing, including Indiana.

“The thing that I feel helps Gov. Bush be widely accepted across party lines, across ideologies, is the fact that he is not an angry education reformer.”
—Tony Bennett

When Bennett talks about high stakes testing like the IREAD-3, he likes to quote Sec. of Education Arne Duncan, who said in a speech back in 2010 that we can’t keep lying to our children. Bennett says he believes the trauma of being held back in third grade pales in comparison to what happens if students never achieve literacy at grade level:

I don’t think there’s anything as traumatic as having to go to 19 different communities like I did last summer where we were considering intervention in failing schools and almost unanimously hearing that one of the most prevailing problems, especially in these high schools that have been chronically underperforming, was a dynamic where so many of the children were asked to master literacy in high school textbooks that they frankly weren’t prepared. We had teachers say, ‘we have kids reading at the fifth and sixth grade level.’

Bennett says now that the initial wave of IREAD-3 testing is over, it’s time to seek feedback that will help improve the state test over time. He says what makes Bush an effective advocate for education is a “get it right” attitude that encourages adjustment and improvement as policy is put into practice.

“You can pass all the sexy laws you want, but until you implement them, until you make those adaptations, you must constantly look at a continuous improvement plan,” Bennett said. “I think that’s the challenge, and that’s the key to not hitting constant plateaus.”

Throughout his interview with O’Connor, Bennett reiterated the deep respect he has for Bush’s ability to work across party lines to do what’s best for kids. He says that even when there’s disagreement, both sides need to tone down the angry rhetoric and focus on how to fix the problems that exist in schools today.

“Jeb Bush has a big, a big mind and a big heart for education reform,” Bennett said. “I believed in my heart that he had a great blueprint.”

Bennett is part of Bush’s Chiefs For Change program that unites top-level education officials who are pursuing policy changes in their states.