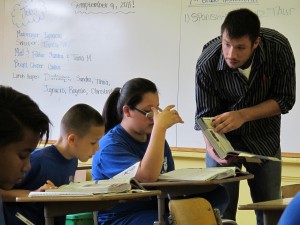 A study from the Indiana Business Research Center found graduates with certain degrees fared better than others during the recession. Education majors had one of the lowest probabilities of unemployment.

As we’ve written, college graduates were more likely to keep their jobs during the recession than workers with less education. Now the latest report from the Indiana Business Research Center offers a glimpse at which degrees offered the most protection from unemployment.

Graduates with degrees in architecture, industrial arts and engineering had a much higher probability of unemployment than workers in health, education and life sciences, fields where the chances of being laid off were lower, according to the report.

The study draws on data from the Indiana Workforce Intelligence System and looks at students who graduated from public colleges and universities from 1998 to 2008 with a verifiable history of employment in the state. Researchers at Indiana University’s Kelly School of Business then compared the employment prospects of sixteen different majors.

Here’s what they found:

Is There Such A Thing As A ‘Recession-Proof’ Degree?

It’s one of the questions the study’s authors pose before launching into their findings. Whether or not they answer it is up for debate — but one of the most interesting findings is that graduates with certain degrees were more likely to be unemployed regardless of the industry in which they worked. From the report:

Two of the three majors hardest hit by the Great Recession and its aftermath—architecture, industrial arts/consumer services and engineering—had high chances of becoming unemployed regardless of industry. Architecture and engineering graduates working in the sectors of health care and social assistance, educational services, financial activities, public administration, and leisure and hospitality all had high unemployment rates, compared to graduates with other academic concentrations working in those industries.

So what’s the takeaway? A growing body of research on employment opportunities and degree attainment might help the next generation of college students make decisions about taking on debt to pay for their education. Or it might making picking a major even more difficult.