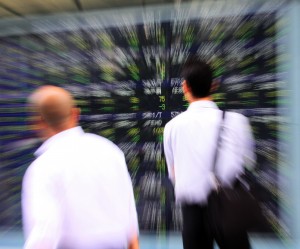 Just like in the housing market, private lenders gave out more college loans to more students who likely shouldn’t have qualified for them. Now, defaults among those loans are “spiking.”

That’s the conclusion of a report federal education officials and the Consumer Finance Protection Bureau released Friday that never once used the word “bubble” to describe the student loan market.

The report did, however, suggest the same risky lending practices that fueled the housing crisis were used in the student loan market too.

The Consumerist has a really good recap:

[The report] confirmed what many of us have believed — that there is a huge danger to the economy by runaway student lending in the last decade.

In 2001, lenders handed out less than $5 billion in private student loans in the U.S. By 2008, that had swollen to more than $20 billion, as lenders began marketing and disbursing the loans directly to student borrowers.

Between 2005 and 2007, the CFPB says the percentage of undergraduate student loans made without the involvement of the school jumped from 40% to 70%.

“As a result, many students borrowed more than they needed to finance their education,” writes the CFPB. “Additionally, during this period, lenders were more likely to originate loans to borrowers with lower credit scores than they had previously been. These trends made private student loans riskier for consumers.”

As a result of the increased lending and as the broader economy stumbled, the report continues, student loan defaults shot up. By 2009, more than $200 million-worth of the loans made in 2008 had already fallen into default.

“Starting in 2008… banks and investors incurred sharply increased defaults on loans made during the lending boom,” the report found. “The timing of these defaults appears to track the recession.”

As we wrote in May, troubling trends in the student lending market are causing a lot of hand-wringing among those watching the broader economy.

“If one is not thinking about where this is headed over the next two or three years, you are just completely missing the warning signs,” Rajeev V. Date, deputy director of the Consumer Financial Protection Bureau, told The New York Times.

However, as we also noted, others believe the problems of the student lending market are likely to self-correct — and despite the risks of college loans, higher education is still worth it for most people.

If you’re having trouble paying down your student loans, the Consumer Financial Protection Bureau offers a few resources here.