A photo from Twitter of Purdue University's 2012 spring commencement ceremonies.

Read enough of the scary stories about skyrocketing college debt we and others have written recently, and a critical question is sure to follow:

Are student loans — like “dot coms” and risky mortgages before it — another investment bubble that’s about to burst?

This weekend’s lengthy The New York Times writeup on student loan debt raises the question again, comparing the events leading up to the housing crisis with the recent explosion in student lending.

The head of the nation’s largest student lender has bristled at the wanton use of the ‘B’-word. Sallie Mae CEO Albert Lord told Bloomberg that, given recent economic history, “it’s not really a surprise that many see bubbles around every corner.”

But even if Lord is right, the Times story makes clear some of the same troubling trends in college financing others have pointed out before aren’t reversing themselves. Among those trends: 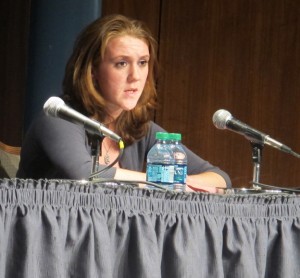 Junior Kate Lavery says she's unsure whether she'll be able to finish her sociology degree from IU because of her debt load. It largely hinges on whether her parents are approved for a federal college loan next year. She spoke with StateImpact last month.

“We were always told, ‘Go to college, get your degree, so you get a good job, so you can pay off those loans.’ So we always knew that the loans were going to be there, but we never sat down and said, ‘This is the figure.’”
—Kate Lavery, Indiana University junior. (Check out her story here.)

“If one is not thinking about where this is headed over the next two or three years, you are just completely missing the warning signs,” Rajeev V. Date, deputy director of the Consumer Financial Protection Bureau, told The Times. As Martin and Lehren continue:

Mr. Date likened excessive student borrowing to risky mortgages. And as with the housing bubble before the economic collapse, the extraordinary growth in student loans has caught many by surprise. But its roots are in fact deep, and the cast of contributing characters — including college marketing officers, state lawmakers wielding a budget ax and wide-eyed students and families — has been enabled by a basic economic dynamic: an insatiable demand for a college education, at almost any price, and plenty of easy-to-secure loans, primarily from the federal government.

Date’s not the only person sounding the alarm. Standard & Poor’s and Moody’s Analytics have each issued warnings that the explosion in student loans may lead to a bubble.

So Date says the growth in student loans resembles the growth in risky mortgages, and Wall Street types say there might be a bubble. But is there a bubble already? That’s a tricky call to make, writes the AP’s Justin Pope:

A bubble is never apparent until it bursts. But the short answer is this: There are worrisome trends. A degree is an asset whose value can change over time. Borrowing to pay for it is risky, and borrowing is way up. The stakes are high. You can usually walk away from a house. Not so a student loan, which can’t even be discharged in bankruptcy.

But there are also important differences between a potential “student loan bubble’’ and an “education bubble.’’ Furthermore, many economists think the whole concept of a bubble is a misleading way to think about what’s happening, and may actually distract from the real problems. College affordability is a serious issue, but it’s a different one. Borrowing for college and borrowing for, say, a house, are fundamentally different in important ways.

Pope adds there’s little chance the bursting of a student loan bubble — if it exists — would cripple the economy on a scale of the recent financial crisis.

“None of that, however, changes the fundamental risk for individual student borrowers: they could borrow heavily to pay for a college education and find the return much less than expected,” Pope writes.

Are you worried about a possible student loan bubble? Or are these fears too hyperbolic? Let us know.