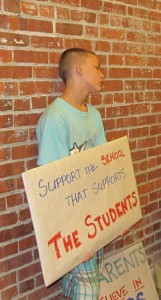 Parents and students arrived at Wednesday's emergency school board meetings holding homemade signs. Throughout the meeting, they cheered and chanted, 'Save our school!'

“I think the school serves children who have significant needs, and they were meeting those needs. Test scores are just part of what they should be measuring.”
—Sharon Wilkins, board member

A group of parents whose children attend The Indianapolis Project School say they’ll protest an enrollment fair aimed at placing their children in other schools. Mayor Greg Ballard announced Tuesday he plans to revoke the school’s charter because so few of its students passed statewide standardized tests this spring.

School leaders met with the mayor’s office Thursday to ask to keep the school open. About 60 parents, who were not allowed to attend the meeting, held a simultaneous demonstration against the closure across the street at the City Market.

The timeline the mayor’s office announced Tuesday said a decision about the school’s future would be made within 14 day]. The school board is asking the mayor to make an expedited decision so families aren’t left scrambling to place their students in another school.

“The timeline is really devastating to our school community,” Daniel Baron, president of the board, told StateImpact. “It was set up so the decision would be made the day after school starts, on August 7.”

Board members learned Tuesday afternoon that the mayor intended to close the school after just 29 percent of students passed the spring ISTEP+ test in both math and English. In a prepared statement, Ballard said the school was struggling financially and had mismanaged federal funds.

“Academic performance is a baseline for an effective school,” Deputy Mayor Jason Kloth told the Indianapolis Star’s Scott Elliott. “It is, and will continue to be, a central focus for how schools are held accountable.”

But parent Matthew Brooks says there’s a reason why the school’s passage rates were so low — about 20 families at The Project School opted out of the statewide standardized test. Parents organized alternative activities for the 30 students on test days, like planting a garden and measuring rainfall.

The school also serves a number of students who haven’t succeeded in other classrooms. At Thursday’s meeting with the mayor, the board presented data on retention and transfer rates at the school. According to the school board’s data, 57 percent of the school’s seventh and eighth graders have been in four or more schools.

Also according to data from the school board:

At an emergency school board meeting Wednesday, Baron said it would take time to bring new students to proficiency but The Project School was working to do that.

But the mayor’s office isn’t backing down. An enrollment fair is scheduled for July 26, though Brooks says some parents plan to picket any attempt to place students in other schools.

School board members refuted claims that The Project School is financially insolvent, citing an external audit recently completed by Old National Bank. But Elliott writes that the mayor’s office began investigating earlier this month, when a teacher complained that the school didn’t pay it’s employees on the scheduled date. Kloth told Elliott the school then overdrew its account.