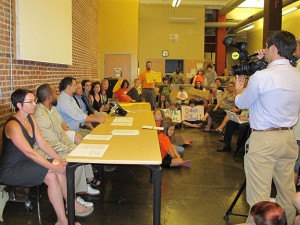 Leaders of an Indianapolis charter school have filed legal documents asking a judge to stop Mayor Greg Ballard from shutting them down.

But Project School board president Daniel Baron says the school has filed documents requesting a legal injunction to block Ballard from shutting the school down for a full year, allowing more time for the “evaluation and correction process” the school’s leaders say mayor’s office owes them.

“This is a unilateral act by a single elected employee ignoring the wishes of the constituency that he serves to keep the school open,” Baron told StateImpact Friday.

StateImpact was not able to immediately reach officials in Ballard’s office for comment.

As we wrote last Wednesday, the mayor’s office had cited concerns about The Project School’s finances in its decision, including about how the school spent federal grants. The Indiana State Board of Accounts found the school may have used money intended for facilities and planning to pay salaries and other operational expenses. (You can read the full report, including The Project School’s response, here.)

Ballard’s office also cited The Project School’s passage rates on statewide tests as a reason for its decision to close the school. Fewer than 30 percent of Project School students passed both the English and math portions of the ISTEP+, a passage rate ranking among the lowest in Indiana.

“The Project School ranks among the worst performing schools in Marion County and in the entire state,” Ballard said in a statement.

But Project School parents and students have rallied to the school’s defense, turning out in force at a recent rally, forming a Facebook group and announcing plans to protest an enrollment fair the mayor’s office is organizing to help parents find new schools for their students.

Baron says Ballard’s assertions of financial mismanagement are untrue and unfair. He told parents at a meeting last Wednesday that Old National Bank had given the school’s finances their seal of approval.

He also disputed the idea that the school was a poor academic performer, saying the school serves a largely impoverished and transient population of students. (Elle Moxley recaps some demographic data on the school in our post last Friday.) Baron points to better test results for students who have been enrolled in The Project School for a year or more, saying this shows the school’s project-based methods work.

Baron added the injunction was filed because the Ballard’s office did not allow for “due process” in announcing the revocation of The Project School’s charter. According to a statement from the school, education officials in the mayor’s office ‘misdirected’ Project School administrators, sending school leaders mixed signals when they attempted to submit a strategic plan.

“In order for [Ballard] to use that authority [to grant or revoke school charters] appropriately, it seems like he must have a public forum to hear the response and concerns of those people being served by the school and the people responsible for the school. That process was denied The Project School community,” Baron told StateImpact Monday.

Barring court action to block Ballard, Scott Elliott writes in the Indy Star it’s “unlikely” the school could open its doors for students when classes were scheduled to resume on August 6.

As Deputy Mayor Jason Kloth told Elliott, “Academic performance is a baseline for an effective school. It is, and will continue to be, a central focus for how schools are held accountable.”

Project School officials sent a press release announcing their request for an injunction just before 4:30 p.m. Monday. We’ll update this post with reaction from the mayor or officials in the mayor’s office if and when we hear it.