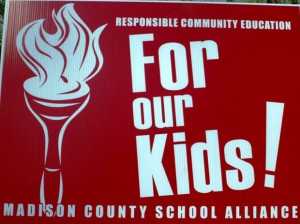 Members of the Madison County School Alliance have been trying to break away from the Anderson Community School Corporation Since 2010.

Running a school corporation is expensive — that’s why Governor Mitch Daniels has touted school consolidation as a way for small, rural districts to save money during tough economic times. In 2011, he backed a bill that would have forced the consolidation of Indiana’s smallest districts.

The buses that roll through Dwayne Smith’s neighborhood in Richland Township aren’t full these days. That’s because a lot of parents pulled their kids out of Anderson Community Schools two years ago when the district voted to merge the city’s two high schools.

Every few days, Smith takes his turn driving the carpool to Yorktown Middle School. His kids used to go to Anderson schools, but after the merger, Smith says he got frustrated with the direction he felt the district was going. He says Yorktown offers enrichment opportunities that Anderson doesn’t, like introductory foreign language classes starting in the sixth grade. But Smith says that move has come at a cost: community.

“Just the other day, me and my son were in the car, and I saw a kid about his age, and I said, ‘Who is that?’ and he said, ‘I don’t know.’ And that was, you know, a couple of blocks from my house. He had no idea who he was because I’m sure he goes who knows where,” Smith said.

When the Anderson Community School Corporation was in the process of restructuring, they held a series of meetings seeking public input into the future of the school system. Parents whose kids attended Highland High School asked the district not to close their school.

Anderson businessman Rick Fulaytar says the board’s decision to close the school frustrated community members who felt they had been ignored. The year before merger, graduation rates at both schools were below the state average, but Highland’s graduation rate was better — 67 percent to Anderson High’s 46 percent.

“So I contacted the state, the Department of Education, and found out information about how can you do deannexation, split a school district, so we could have our own school district and hopefully provide a better education for the students,” Fulaytar said.

“We still have a difficult opportunity attracting business leaders to our community so that we can get it to grow. So I think this is something people would like to see their property value climb instead of decline like they have been for several years now.”
—Troy Abbott

Fulaytar says his question caught the state off guard — typically, school districts want to consolidate, not split apart. So Fulaytar and other community leaders decided to submit a proposal for deannexation to the Department of Education. Here’s what’s interesting about the Madison County School Alliance — it’s not just parents advocating for the split.

“We still have a difficult opportunity attracting business leaders to our community so that we can get it to grow,” said Troy Abbott, the group’s president. “So I think this is something people would like to see their property value climb instead of decline like they have been for several years now.”

Under the Madison County School Alliance’s plan, there would be two elementary schools and an intermediate school. The group cites research from the Center for Evaluation and Education Policy that shows the size of the optimal school corporation in Indiana is 1,942 students, the approximate enrollment of the proposed East Madison School Corporation.

In 2010, the Madison County School Alliance took its proposal to the Department of Education. In a letter dated May 27, 2010, Superintendent of Public Instruction Tony Bennett wrote that deannexation runs counter to the policy initiatives set forth by the bipartisan Indiana Commission on Local Government Reform.

The report Bennett cited says many of Indiana’s 293 school districts are just too small to take advantage of the cost efficiencies larger districts enjoy:

The overarching goal of school corporations should be to maximize student achievement at the lowest possible cost. Indiana currently employs fewer instructional personnel,
including teachers and instructional aides, as a proportion of employment, while employing more cafeteria workers, bus drivers and ‘other’ personnel than the national average for states.

Bennett encouraged the group to consider establishing a charter school if they still felt strongly about breaking away from Anderson Community Schools. But that’s not what members of the Madison County School Alliance want, Abbott says.

“As we investigated the issue, we decided that a charter school is what you do if you have no other options,” he said. “People where we live have other options. There are other school corporations where they can send their kids.”

And that’s what many parents did. Anderson started the 2010-11 school year in August with 1,200 fewer students than it had in May.

The district points to Bennett’s letter when asked about the possible deannexation. Superintendent Felix Chow said he didn’t want to be interviewed for this story, but in an email he reiterated the state’s position and went on to say that nationally schools are moving toward consolidation because smaller districts cost more.

“As I was informed, some forty years ago, Richland Township asked Anderson to take their schools over because they couldn’t afford to be an independent school district anymore,” Chow said in the email. “Now, Anderson is a declining urban city, MCSA wants a ‘divorce.’  This is typical of an ‘urban flight’ in many cities around the nation.”

For his part, Smith says the district’s position shows just how out of touch it is with rural residents.

“Anderson talks about Anderson Community Schools being an urban school district, but you know, out where we are, there’s a cornfield in my back yard. That’s not us.”
—Dwayne Smith

“Anderson talks about Anderson Community Schools being an urban school district, but you know, out where we are, there’s a cornfield in my back yard. That’s not us,” he said.

Abbott says, realistically, he knows that parents who have already made the decision to put their kids in a different school are unlikely to pull them again — even if MCSA were able to successfully split from Anderson Community Schools.

So MCSA is working with Rep. Jack Lutz, R-Anderson, and Rep. Douglas Gutwein, R-Francesville, on legislation that would allow residents to break away and form their own school district or join with another corporation. That bill goes to study committee this summer.