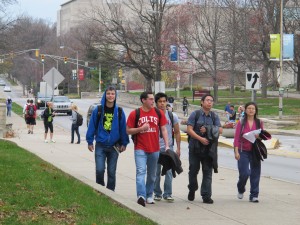 Indiana students know the pain of defaulting on student loans better than most, as we’ve written.

As Jason Delisle at The New America Foundation blogs, so does the federal government:

Countless journalists, advocates, and lobbyists claim that the government profits when students default on their federal loans. But this week’s release of President Obama’s fiscal year 2013 budget brings further evidence that nothing could be further from the truth.

The Obama administration’s latest budget proposal shows the federal government only recovers 82 percent of a student loan after it enters default.

Though the feds can often recoup 96 percent of the lost loan’s value, it can take years for the feds to recover the full amount of the loan — and, as Delisle writes, “time is money”:

Student loan defaults are costly for borrowers and taxpayers alike. And for those who still believe federal student loan interest rates are too high because the loans pose no default risk for taxpayers and that the federal government is the world’s best debt collector: In the words of the U.S. Department of Education, “some loans may have little or no recoveries while others may have substantial collections”

Indiana’s college and university administrators are feeling the burden of these costs too, coupled with pressure from state lawmakers to keep school affordable and on-time graduation rates high.

At a Lumina Foundation panel in February, Indiana Higher Education Commissioner Teresa Lubbers says she had spoken with Indiana University administrators who floated the idea of cutting off the flow of student loans to those who weren’t showing some promise of graduating.

“We should not be telling students to borrow money if they’re not academically succeeding,” Lubbers said.

Whether its lack of academic success or slow economic times, more students aren’t succeeding at paying back their loans.

As The Wall Street Journal reports, “Historically, investors have assumed 25 to 30 percent of student loans bundled into their bonds will default. But today they are baking in between 30 and 40 percent default rates among the current crop of graduates.”

Alex Pollock argues the best way to deflate the student loan bubble is to hold colleges more accountable in the financing process:

Who are the most important parties to have “skin in the game” in student loans? The colleges themselves, of course! They are the effective originators, the promoters, and the chief financial beneficiaries of student loans. It is their rising costs which result in ever more debt and more risk of default for student borrowers and for taxpayers.

The federal student loan programs should simply compel colleges which get proceeds from the programs to maintain a 10 percent first-loss share in the credit performance of the loan. This puts a material risk of excessive and un-repayable debt and of high college costs on those who are promoting the loans. The colleges would stand to take losses on bad loans before the taxpayers, as they should—they would, in financial parlance, be subordinated or “junior” to the taxpayers. A highly desirable improvement in financial structure and incentives!

If you have taken out, are considering taking out, deathly-afraid of taking out, or currently paying back student loans… We want to hear from you! What do you think is the best way to drive down the cost of going to college?