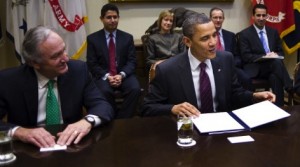 Sen. Tom Harkin (D-Iowa) with President Obama in March. Harkin, along with Sen. Mike Enzi (R-Wyo.; not pictured), has introduced a potential replacement for the No Child Left Behind Act in the Senate.

As far as “weeks-that-were” go in education policy, last week was big.

A bill rewriting the No Child Left Behind act made it out of committee on Thursday. For all the bluster about rehashing NCLB over the years, this hasn’t happened since the original law passed in 2001.

But just because the current law is a political loser doesn’t mean its replacement — which reduces the federal role in education policy while eliminating the old law’s unpopular performance targets for schools — is an automatic winner.

The rewrite, penned by Sens. Tom Harkin and Mike Enzi, scraps the widely-hated part of NCLB that requires every school to make “adequate yearly progress” towards making 100 percent of their students proficient in math and reading by 2014. As EdWeek reports, the bill would also consolidate programs at the U.S. Department of Education, but empower the feds to intervene in some of the nation’s lowest-performing schools. (EdWeek has a good laundry list of changes.)

So does this bill have the momentum needed to pass? All sides of the debate seem to get something they want out of Harkin-Enzi. The right-leaning Fordham Institute’s Mike Petrilli came around to pen this line on his blog after voicing vehement opposition earlier in the week:

Let’s admit it: Harkin-Enzi is better than current law. I’ve still got a lot of beefs with it… but it represents several steps in the right direction.

The political calculus of an NCLB rewrite is still tricky.

The right, on one hand, wants the federal government to step back even further. And civil rights groups are worried dropping the “adequate yearly progress” (AYP) yardstick represents the government giving up on a signature policy piece designed to close the gap between the worst-performing and best-performing students. From Education Trust:

In [the bill’s] current form… states would not have to set any measurable achievement and progress targets or even graduation rate goals. They would be required to take action to improve only a small number of low-performing schools. In schools which aren’t among the states’ very worst performing, huge numbers of low-achieving students will slip through the cracks.

And don’t get left-leaners started on teacher evaluations.

The last time Congress considered revising ‘No Child’ was 2007, when a proposal fizzled in the House Education committee. It’s been so long that the Obama administration has said they would offer waivers to absolve states from the most troublesome duties under NCLB. Indiana’s currently working on its waiver application, due November 14.

What are the chances a rewrite passes this time around? Alexander Russo’s wonders if the Obama administration wants the bill to fail:

[Education Secretary Arne] Duncan expressed his disappointment in the legislation on Monday but then went off to push the $35B teachers/first responders package (which failed last night).  Was there a desperate but ultimately ineffective behind the scenes effort to improve Harkin-Enzi from the Duncan folks and the White House, or do they want any bill they can get, or are they just hoping that this all falls apart on the Senate floor and in the House so that they can do the waiver thing?

Petrilli makes the argument that even in the Democratic Senate, it’s Republicans who will ultimately sculpt Harkin-Enzi’s final form:

Yesterday’s unanimous Democratic vote might have been a display of party unity, but it also demonstrated a willingness to vote for almost anything. The Democrats want to send a bill to the President, and they will need Republican votes in order to do that. So expect GOP senators like [Tennessee’s] Lamar Alexander [and North Carolina’s Richard Burr] to make their support contingent on key changes to the bill–and to get a lot of what they want. Meanwhile, the House bills (which are being put together in pieces) will surely come out to the right of the Senate. If Democrats want to get something across the finish line, they are going to have to accept something that looks a lot more like Alexander-Burr than Harkin-Enzi.