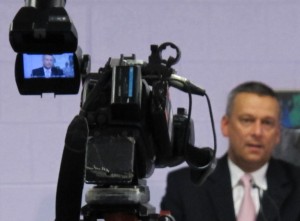 Indiana schools are improving — at least, if you’re judging them by the State of Indiana’s own standards.

Federal numbers paint a picture of decline. In 2011, 84 percent of Indiana schools made overall Annual Yearly Progress (AYP) targets in laid out in the federal No Child Left Behind Act, down from 91 percent in 2005.

But state numbers paint a different picture. More than half of Indiana schools earned “A” ratings for “exemplary progress” — more than ever before — under Public Law 221, a statewide school accountability law.

So what’s with the divergent picture of Indiana education? It largely has to do with the targets set under the different federal and state laws.

ALSO READ: What Indiana schools are at the highest risk of state takeover?

Under Public Law 221, the state tells schools to make incremental improvements in their test scores every year until more than 90 percent of their students are passing state tests. The amount of a school’s annual increase or decrease from the year before determines their state rating.

Under No Child Left Behind, all schools are shooting for the same target: 100 percent — every single solitary student — must be proficient in basic math and English skills by 2014.

That goal is now widely viewed as impractical: U.S. Secretary of Education Arne Duncan warned in March that if NCLB isn’t reformed, more than 80 percent of schools will not make AYP. With reauthorization of the law caught up in congressional deadlock, that’s prompted Duncan to offer to issue waivers to states from NCLB’s provisions.

As we reported, Indiana state superintendent Tony Bennett has said he’ll ask for an NCLB waiver for Indiana — but he doesn’t think the federal government should give them out as free passes for states who’ve shirked their responsibilities to turn their schools around.

“The real danger is to accept blanket waivers or blanket waivers couching soft reforms. We’re going to have very rigorous waivers with rigorous reforms underneath it,” Bennett told a D.C. crowd earlier this month.

No school can score higher than a “C” on Indiana’s rating scale without making AYP.