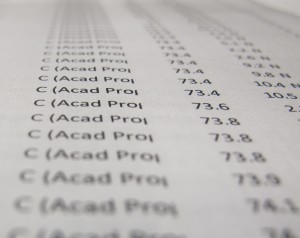 Indiana Department of Education officials have proposed to drop an 'AYP Cap,' which limited a school's state-issued letter grade to a C if a school failed to make required progress under No Child Left Behind.

“No one liked” the cap that limited a school’s state-issued letter grade rating to a C unless the school met performance goals laid out under No Child Left Behind, a top state education official tells StateImpact.

But Jon Gubera, Chief Accountability Officer at the Indiana Department of Education, also says the unpopularity of the so-called “AYP cap” isn’t at the heart of why state education officials want to drop the cap as part of an overhaul Indiana’s system for rating schools.

Gubera says with the current No Child Left Behind act rapidly going out of style, there’s little need to attach the state’s letter grade to the federal law.

Moving forward, “[a cap] doesn’t make sense. We’re going to remove it because it’s something that shouldn’t be there,” Gubera says.

Last year alone, StateImpact found the cap lowered the state letter grades of 319 Indiana schools who performed well enough to earn A’s or B’s, but earned C’s because they failed to make “Adequate Yearly Progress” under NCLB — much to the dismay of many district- and school-level administrators.

But Gubera says the caps exposed a weakness of the old system by which the state issued schools ratings.

This year, the ratings were issued for the first time in letter grade form, meaning what had once been known as a school making “Academic Progress” would now be known as a “C school.” It was only after this change, Gubera says, that schools began to complain about the AYP cap:

“We didn’t hear a word from them while it was “Academic Progress.” As soon as we flipped the switch to A, B, C, D and F, then [schools] came calling saying ‘Oh my goodness, now we’re a C school?’ Exactly. These grades actually mean something to people. Because [people] can relate to them, the grades drive conversations.”

Gubera says the state’s new system will truly reflect what goes on in a school by measuring growth of in students’ performance on state tests.