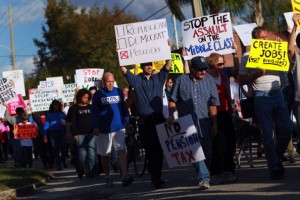 Teachers and union workers came together last legislative session to protest bills that put limits on the collective bargaining process. Along with teachers, the ISTA was able to work with other groups like the American Federation of Labor and The United Autoworkers in organizing these demonstrations.

Legislators from across Indiana are already in the statehouse pushing for everything from right to work to modifications to the state’s property tax code.  And where there are lawmakers there are lobbyists- influential outsiders trying to push their agendas through the halls of power.  We’ve been covering these entities in a series we’re calling “Meet The Influencers.”  Last week, we brought you a conservative think tank which works with Republican lawmakers to draft legislation. This week, we continue our series by looking to the other side of the aisle.

It’s been a rough few years for the ISTA.  The state’s largest teacher’s union took a beating last session on a variety of issues ranging from collective bargaining, to teacher evaluations, to school vouchers.  The group opposes all of these and a slew of other education related policies that became law earlier this year.  In fact, much of the followup to last session involved covering a half dozen lawsuits challenging nearly every part of the Republican education policy platform.

So you may wonder why they’ve been included in a series on the biggest influencers working in the statehouse cloakroom.

One thing is clear, if money is influence, then the ISTA definitely has influence with Indiana’s Democratic lawmakers.

An initial campaign finance search of everything that IPACE (the ISTA’s lobbying division) has ever given to Democratic candidates including in kind and soft money donations turned up this message.

Literally too many contributions for the system to accurately track.

When that search was narrowed down to direct money contributions, it returned $565,400 in donations to Democratic candidates. Many of those individual contributions total $20,000 or more and some are as high nearly $60,000. For comparison, a similar search for ISTA contributions to Republican candidates returned zero results.

The Indiana State Teacher’s Association is composed of a network of smaller teachers unions from around Indiana.  They have been able to leverage this in organizing large grassroots protests both at the statehouse and across Indiana.  This video from pro-union Education Advocacy Group, shows the mass of people the ISTA is able to bring out in defense of its position.

The ISTA’s critics have used this very ability to mobilize teachers as proof that the union is more interested in the needs of teachers than the needs of students. In an interview during the last legislative session, State Superintendent of Public Instruction Tony Bennett accused the group of taking teachers away from the classroom to advocate against policies that he says benefit students.

“I would never prevent teachers from having their voice, but I have to wonder who is leading in the classroom while all of these teachers are in Indianapolis?” says Bennett.

The ISTA’s policy agenda extends beyond the legislature and has brought the group into often direct confrontation with the Republican controlled Indiana Department of Education.  It’s currently engaged in a number of lawsuits against the IDOE.  The most high profile of these conflicts center on Indiana’s new school voucher program and mandatory teacher evaluation law.

We asked former legislative council and labor lawyer Kenneth Dau-Schmitt to look over a law which limits collective bargaining rights for teachers, and he indicated there may be constitutional issues with a clause in the legislation which cuts teachers unions out of forming grievance procedures.

“The problem with imposing one is that they (school boards) are a state actor and you have a 7thamendment right to a jury trial and the state can’t come in and impose a system on you that takes away that right.” says Dau-Schmitt.

The ISTA has not updated its legislative agenda for this year and calls to the organization have not been returned as of our deadline.