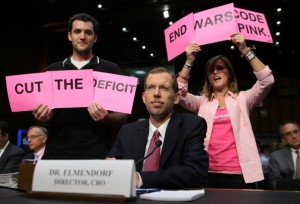 Remember how we told you in August to circle November 23 on your calendar?

What with November coming Tuesday and all, we thought we’d remind you that’s the day deep, automatic, across-the-board spending cuts kick in if the Congressional “supercommittee” charged with reducing the federal deficit doesn’t reach a deal.

With the deal still, for the moment, out of reach, here’s what’s at stake:

On one hand, if the supercommittee can’t agree on a plan before Thanksgiving, that likely means at least $3.5 billion in cuts to education programs would automatically kick in by 2013.

But if the supercommittee does agree on a plan, some fear some specific education programs will still end up on the chopping block.

Start with the automatic cuts, which the Obama administration referred to as the “enforcement mechanism” to give the supercommittee more than 1.2 trillion good reasons to reach an agreement.

The Committee for Education Funding, a left-leaning education lobbying organization, sent a letter to supercommittee members. The letter details the organization’s calculation (based on a Congressional Budget Office report) that if the automatic cuts kick in on November 23, $3.54 billion would be chopped from education programs. That figure includes:

Even if the supercommittee acts in time, spending on higher education appears to be in the supercommittee’s crosshairs. The Pell Grant program, which offers financial aid for low-income college students, seems to be a principal target. From Inside Higher Ed:

The growing Pell Grant Program, which includes both discretionary and mandatory spending, is said to be one of the super committee’s prospective targets. Federally subsidized student loans, a $40 billion mandatory spending program, are another tempting source of savings. And the committee could always choose to cap discretionary spending, squeezing Education Department budgets and money for science agencies, and affecting many higher education programs for years in the future.

Ed Money Watch says $157.9 billion in tax credits for K-12 and higher education could also be a source for cuts.