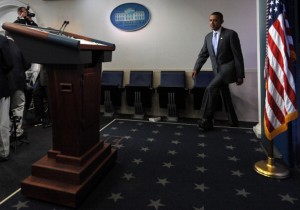 US President Barack Obama announces a debt ceiling deal at the White House on July 31, 2011.

Circle and star a new date on your calendars, political wonks: November 23, 2011.

If lawmakers can’t agree on new cuts to discretionary spending by then, as they say they will under Sunday’s debt ceiling deal, then $500 billion in deep, across-the-board cuts kick in automatically — and education would be one of the specific targets. The White House calls this an “enforcement mechanism” to make sure all sides have an incentive to participate in talks on what to cut.

In the short term, education got a reprieve. The debt deal spares Pell Grant funding from cuts many had feared, and lawmakers appear committed to holding the line on the level of tuition assistance it offers to low-income students.

But that doesn’t mean the deal has soothed every worry.

The bipartisan debt reduction “Committee of Twelve” will cut $900 billion in “discretionary funding” by that November 23 deadline — from where it’s not clear — but K-12 education programs could be in the crosshairs.

The Associated Press reports the cuts could affect the early childhood program Head Start, and other federal aid to states for education. The top Democrat on the House Education committee, California Rep. George Miller, told the AP the cuts “are going to make life much more difficult for” public schools.

Those in higher education appear a lot less worried after the deal, though. Inside Higher Ed wrote:

The situation is overall less dire for federal financial aid programs than it seemed earlier in the debt talks, when proposals were put forward to cut Pell Grants and eliminate subsidized student loans.

The White House said in a fact sheet posted online Sunday night that the deal was “designed to protect crucial investments like aid for college students,” giving “specific protection in the discretionary budget” to ensure that there will be sufficient funding to keep Pell Grants at their current level.