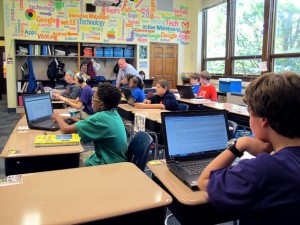 Students at St. Thomas Aquinas in Indianapolis use school-owned computers during a writing class.

Make no mistake: now a $32.1 billion-per-year market, education technology has become too big to ignore for anyone.

Rupert Murdoch’s in the game. Steve Jobs’s iPad is finding a home in hundreds of American classrooms. Bill Gates just threw $20 million at an initiative to build up e-learning.

That said, even those who stand to gain the most from getting techie teaching options into the classroom worry they’re neither effective nor accessible enough to help all students.

Case in point: The New York Times reports many educational software developers market their products to schools as “revolutionary curricula” — when in fact the software has no effect on students’ test scores:

School officials, confronted with a morass of complicated and sometimes conflicting research, often buy products based on personal impressions, marketing hype or faith in technology for its own sake. “They want the shiny new one,” said Peter Cohen, chief executive of Pearson School, a leading publisher of classroom texts and software. “They always want the latest, when other things have been proven the longest and demonstrated to get results.”

Indiana state education officials say they hope to resist this impulse — to “want the shiny new one” — while still fully embracing the use of forward-thinking classroom technologies. The state is backing $4.3 million in grants to try out new tech-centric ideas in schools and districts.

“People are sort of leaving behind the discussion whether or not we should have technology [in classrooms] and focusing on the question of ‘how?’ How will these tools inside the school and inside the learning context be put to good use, not just a doing these things differently, but doing different things?” says John Keller, assistant superintendent for technology at the Indiana Department of Education.

But Keller says the state has to resist the urge to go after an “uptown model” that may not have results for students.

“We have to make sure… we don’t get so enamored of a new model that we still have to measure whether or not students actually learn in these types of situations,” Keller says. He also says administrators have to implement the model in a way that makes sure teachers have “permission to fail” but won’t be detrimental to students.

Striking that balance is difficult, as even Bill Gates seems to acknowledge in a blog post over the summer:

There still is a lot to be proven in online learning… There are a lot of things I want to learn more about including what is going on with the commercial development of online curriculum. A question I have is: How do we get some very bright people who know education and are knowledgeable about technology involved in helping to drive this forward at full speed?

One other obstacle: a persistent “digital divide” between students who have access to technology outside of school and those who don’t.

That’s not the only barrier to access. Companies with something to lose erect roadblocks too. For example, textbook companies have an interest in obstructing new technology, like e-textbooks, from taking over their market — Wired has the story:

If you’re looking for a textbook example of technology obstruction by the media industry, look no further than e-textbooks… Many textbook publishers are acting like 1990s music executives, slapping on high price tags and copyright handcuffs that conspire to make their products less valuable than their dead tree counterparts…

“About 90 percent of the time, the cheapest option is still to buy a used book and then resell that book,” says Jonathan Robinson, founder of FreeTextbooks.com, an online retailer of discount books. “That is really an obstacle for widespread adoption [of e-textbooks], because smarter consumers realize that and are not going to leap into the digital movement until the pricing evens out.”