Private four-year colleges are giving more merit-based financial aid to more students than public universities, and numbers from the federal government suggest the gap between the two has grown significantly in the last 15 years.

A report from the National Center for Education Statistics says 44 percent of all students received aid based on their academic performance at private schools in 2007-08. Compare that to 18 percent of students at four-year public schools. 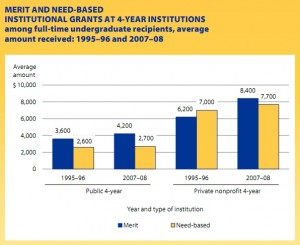 The report comes as public universities in Indiana deal with shrinking state appropriations by hiking tuition — and students take on a bigger debt load to pay for school.

Indiana University president Michael McRobbie repeated the message that the school is offering more students financial aid, even as dwindling budgets force IU to tighten its belt. He acknowledged during his State of the University address, though, that higher tuition could drive students away. From the Indiana Daily Student:

The reality, however, is that many of IU’s in-state students pay less-than-advertised tuition rates due to significant scholarship and grant aid.

“In fact, three out of four in-state students at IU Bloomington receive some form of financial aid,” McRobbie said.