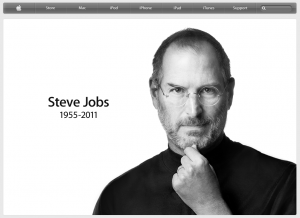 A screenshot of the now-iconic front page design of apple.com that went live right after news of founder Steve Jobs' passing.

Of all the different ways one could sum up the enormity of the void Steve Jobs’ passing has left, let’s add one more to the mix:

Add up all of the Ellettsvilles, Center Groves, and Johnson Counties across Indiana — heck, across the U.S. — where school districts introduced Apple iPads into mainstream public school classrooms.

Part of Jobs’ legacy is certainly connected to his company’s contributions to education technology. When Apple first marketed its computers to K-12 schools in the ’80s, the company created a “beachhead” for their products which, for good or for ill, remains to this day.

Only now, the beachhead is flooded not with Apple II desktop computers, but with sleek tablet devices. Apple told Yahoo! News it knows of at least 600 schools nationwide where at least one classroom-full of students is using iPads, with administrators piloting a swap-out of textbooks in favor of the tablets.

“For Apple, K-12 growth is the future,” the investment site Seeking Alpha wrote in July. Just as the iPod changed the music industry and the iPhone changed the mobile-phone industry, the iPad could change the textbook industry. In the iPad, Seeking Alpha went on, Apple sees game-changing potential for is education business: 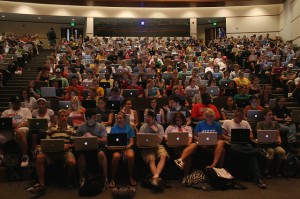 A classroom at the University of Missouri. Look closely — notice the logo on the laptops.

Think about the immense potential as we learned during the third quarter conference call [in which, by the way, the company announced $28.6 billion in revenues] that Apple sold more iPads than Macs to the K-12 market surprising analysts and Apple. If Apple can create brand awareness at a young age, there is a higher probability it will retain that customer as she grows and matures. It is possible that a child born in the next year may grow up never using a desktop computer; her first learning device may be an iPad, and she’ll grow from there. (Mediashift image via…)

But James Harris, an IT guy who works in a School of Education and blogs at Auxiliary Memory, says his Mac experience has been different. Bottom line? “Macs cost too much”:

Every time I meet Apple reps I feel like I’m talking to two clean cut Mormons that have come to my door to sell their religion.  Apple people believe in their Macintosh and feel all kids should have one.  Apple Computers got a beachhead in the school systems with the Apple II machines and it was natural that teachers wanted Macintoshes when they came out.  The trouble is students leaving K-12 schools end up in colleges and businesses where Windows reign supreme…

If 95% of society uses one kind of computer, why have kids study on the one that gets 5% of the market?

An important caveat, lest we over-inflate Steve Jobs influence on education: Access to technology in the classroom is not the same thing as making proper use of technology.

Yesterday, while interviewing Troy Cockrum, a particularly tech-savvy seventh grade teacher at an Indianapolis private school, we discussed how many schools are buying iPads, but not every school knows what to do with them once they’re in students’ hands. Cockrum says technology is only useful when it has a specific educational purpose.

So, as we mark Jobs’ passing, let’s ask about using technology with purpose in the classroom: Did you use Apple products in class when you were in school? Windows? Linux? …DOS? Or are you in school now, using technology like iPads or MacBooks? Do (did) you find these products serve(d) a “specific educational purpose” for you? And are Jobs’ sleek Apple machines worth their potentially higher upfront cost?

Update: Our StateImpact partners in Florida posted a story this morning that seems to say it all — “The death of Apple founder Steve Jobs is an education story as well as a business story.”

(Author’s full disclosure: I gave permission for my face to appear in a promotional video produced by Apple while I was a student at the University of Missouri. Kudos to you if you can even find it in the video — and ironically, the crew caught me at a time when I was particularly frustrated at the Mac I was using, which I guess I hid well for the cameras. I didn’t endorse any products during my brief appearance in the video. Some of my professors did.)