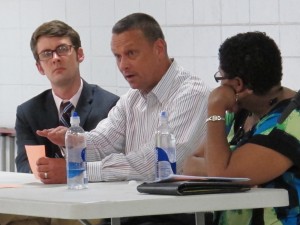 Indiana education officials want more than test scores to determine a school’s state-issued letter grade. As we first reported last night, state superintendent Tony Bennett now wants to add graduation rates and a school’s efforts to get students ready for college or careers to the mix.

Officials at the Indiana Department of Education also want to remove a limit that caps a school’s grade at a C if it fails to make yearly progress required by federal law.

Expect the two biggest changes to the way grades are calculated at the high school level:

So what would the changes mean for schools?

Any change to the letter-grading system set out under Public Law 221 has sweeping implications. The state uses these letter grades to draw up the state’s failing schools list — the same list on which the five Indiana schools now facing state takeover landed six years straight.

Lifting the so-called “AYP cap” — the restriction of a school’s grade to a ‘C’ if they fail to make Adequate Yearly Progress under No Child Left Behind — will likely please district administrators who’ve complained about the limit in the past. 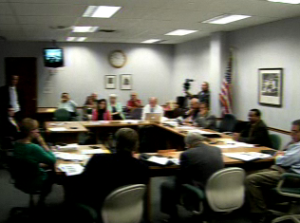 The State Board of Education meets in Indianapolis on the morning of October 5. They saw a presentation of a new way to calculate state-issued letter grades for schools.

Indianapolis Public Schools officials have criticized the old system for not giving their schools credit for improving graduation rates. The new rating system does not differentiate high schools with grades 9-12 and “community schools” with grades 7-12, as IPS officials have advocated. But theoretically, it could give IPS — or any district for that matter — the credit for improving graduation rates they have sought.

But when we visited George Washington Community High School back in August, school principal Deb Leser complained the targets set by the state’s rating system were constantly moving:

Only the State Board of Education has to approve the changes for them to take effect. As this post goes live, they’re still deliberating, and probably won’t make a final decision today. The General Assembly does not have to approve changes to the way the Department of Education enforces the state law unless they involve when education officials intervene in schools.