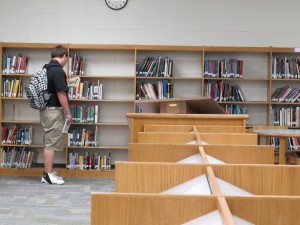 A student looks for a book in the George Washington Community High School library on Monday, August 29.

Most staff at George Washington Community High School were relieved not to be taken over. In fact, most staff are excited to see how two outside groups the state has appointed to partner with current administrators can help the school.

But just because the school avoided takeover doesn’t mean most staff are okay with Washington, located on the city’s west side, being labeled a “failing” school.

Community schools teach middle school and high school-aged students under one roof, offering after-school activities and community services — Washington has a community pool, fitness center, and student health clinic. The community school model is based in the idea that if educators can engage an urban student in middle school, they have a better chance of getting that student to graduate from high school.

But a school’s ranking under Public Law 221 is calculated using test scores, not graduation rates. Because of an 8 percentage-point decline in Washington’s 2011 middle school passage rate on state standardized tests, the state placed the school on its intervention list — despite a 15 percent jump in its high school test scores.

(IPS officials don’t think that’s fair; the Department of Education says it’s the standard to which it holds all combined middle-and-high schools.)

Leser says it feels as though the state’s targets “are always moving,” and worries about talk she hears that ratings will be calculated differently next year — especially when the school’s focus on graduation rates over standardized test scores, she says, puts Washington at a disadvantage:

Now we’re above the state average on graduation rate, but, we’re still in trouble because our test scores aren’t high enough. Why aren’t our test scores high enough?  Well, the change that we made to improve our graduation rate is a change that hurts us on the test scores… We’re showing these big improvements, our kids are performing closer to where they want to be — and they’re not there yet — but in some cases, 30-40 percent higher on their test scores than [at other schools], but we’re on the list, and [other schools] are not, and I think the question is, why would that be?

Tamika Riggs graduated from George Washington back in 1993. She recalls growing up in Indianapolis projects with her mother, who had Riggs when she was 14 and raised her on her own. She also remembers the school environment, while not being rough or unsafe, being relatively unstructured.

Now, after putting herself through college and earning her masters, Riggs runs Washington’s after school program. She says the change in the school’s atmosphere is evident.

“If you walk the hallways here, you very rarely see a student in our hallway that doesn’t have a purpose. Rarely. And not only that, just academically, I can tell that our students are really starting to take their education more seriously,” Riggs says.