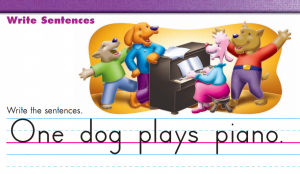 Even if computers will dot students’ I’s and cross their T’s for much of their life, Indiana University research suggests teaching them handwriting skills is still important in helping them learn to read.

IU psychology professor Karin James says that might be unwise. She conducted the research that found teaching young children to write letters activated parts of their young brains that become critical for reading.

“It might be fine [to give the option not to teach handwriting anymore], but we don’t know that,” James says. “And the research is pointing to that it might not be fine, you might be setting up a child’s brain to interpret letters and words in a very different way.”

James’ experiment involved a group of a dozen four- and five-year olds. She scanned their brains, then split them into two groups — one was shown letters and instructed to recognize them visually, the other was taught to write letters. This training went on over four weeks.

“It sounds old-fashioned when you put forth the argument that you lose connection with the past. But then there’s also that scientific aspect of it. We don’t know what’s going to happen later on if you don’t teach children how to write on paper or how to write cursive.”
—Kathleen Wright, textbook publisher

“It’s not just that you’re using your hands to create the letters, because typing seems to be different than handwriting,” James says. “It’s that you’re actually creating those forms with your hands. That seems to be making a difference.”

Literacy expert and Vanderbilt University education professor Steve Graham says the implications for James’ work in an educational setting aren’t clear. Handwriting is clearly important in education, Graham says, but typing should also be taught in the classrom.

Last April, the Indiana Department of Education gave school districts the option to stop teaching cursive in schools beyond third grade because of the state’s adoption of those national curriculum standards, known as the Common Core State Standards. The story made headlines across the country and even in some international newspapers.

But even though the Common Core emphasizes keyboarding, most agree it’s not likely that districts will stop teaching handwriting altogether.

“[Schools] aren’t teaching it as far into the elementary years as they would before,” Wright says. “Whereas people might buy their program K-5 before, now they buy it K-3.

“It sounds old-fashioned when you put forth the argument that you lose connection with the past,” Wright says. “But then there’s also that scientific aspect of it. We don’t know what’s going to happen later on if you don’t teach children how to write on paper or how to write cursive.”