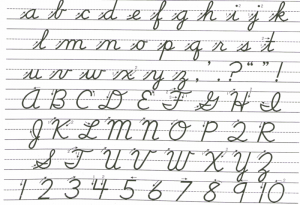 ...a thing of the past in Indiana schools? The state will no longer require cursive.

As the old adage goes, the pen is mightier than the sword. But it appears the once untouchable writing implement may have met its match in Indiana, after the Department of Education said it will no longer require public schools to teach cursive writing.

Instead, students will be expected to become proficient in keyboard use. Seems like a smart move as being able to type efficiently is a vital skill in today’s world, as opposed to knowing how to write cursive, which — like being able to churn butter and knowing how to hitch a horse to a wagon — is no longer needed.

…and in The Daily Beast.

According to a state memo, students will be expected to learn keyboard proficiency instead. The practice may remain at some schools, however, as those that wish to continue teaching cursive will be allowed to do so; it will just no longer be required.