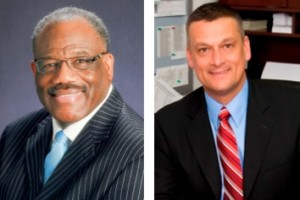 Indianapolis Public School leaders have been pushing back against the state Department of Education announced 2 weeks ago its intentions to take over of six of the district’s schools under Indiana school accountability laws. With final decisions on what that takeover will look like looming at the end of this month, the back-and-forth between state and district officials is becoming a bit more heated.

IPS superintendent Eugene White made overtures at a meeting Monday night suggesting the district will file a lawsuit against the state if it doesn’t back off its takeover plans.

The district has found no sympathy from state superintendent Tony Bennett, who’s been adamant that IDOE will not negotiate terms with any of the schools on a ‘failing schools’ list, based primarily on test scores.

At the HoosierEd blog (a neat one-stop shop for education policy opinion from the Center of Excellence in Leadership of Learning in Indianapolis), White recently gave an example about why he wants four of the targeted IPS schools taken off the takeover list, looking at one of the targeted schools, Broad Ripple Magnet High School:

Broad Ripple is in the unique position of having more than 73 percent of its students pass the English 10 and Algebra 1 ECAs, yet still be labeled on probation because the percentage of improvement was 2 percent versus the mandated 3 percent. Approximately two-thirds of Broad Ripple students are able to pass their ECAs, but the state designates the school a failure. It’s had the highest performance score (74.9 percent) of any of the 17 high schools on fifth year academic probation. To call the school a failure is unconscionable.

…IPS can no longer allow people to distort the truth about the improvement underway in the district.

In a response on HoosierEd, the state’s school turnaround director Jim Larsen didn’t specifically mention IPS, but generally addressed the takeover issue. Since the law the state is using to take over the schools was passed in 1999, Larsen ended his blog with a rhetorical question: “Is twelve years too long to wait? Should schools be allowed to severely under-prepare entire generations of young people?”

So who’s right in this case? Larsen, and the state? White, and IPS? Both? Neither?