Some say the road less traveled might be the best route for finding new faces to add to Indiana’s teaching force.

Indiana faces a teacher shortage, and state policymakers have been searching for solutions since the issue came to their attention late last spring. Lawmakers received a slew of recommendations during a meeting of the General Assembly‘s Interim Study Committee on Education Monday. 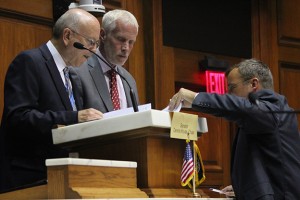 One new suggestion came from the state of Georgia, and it’s what some would call “non-traditional.”

Back in 1999, Georgia was going through its own iteration of a teacher shortage, and then-governor Roy Barnes remedied the problem by introducing an alternative licensing program. The initiative created programs to provide testing and six-week training courses for students who proved themselves in their respective subject areas to learn pedagogy that they didn’t get because they weren’t teaching majors.

According to Ben Scafidi, one of Barnes’ advisors in this endeavor, that strategy has been effective. He says nowadays, almost 20 percent of new teachers in Georgia come through these routes.

“If you’re a smart undergraduate and you have good content knowledge, a high GPA, then you are welcome to teach in Georgia,” says Scafidi, now an economics professor at Georgia’s Kennesaw State University and senior fellow at the Friedman Foundation for Educational Choice. “A lot of students who are smart go to college, [but] they haven’t thought about being a teacher.”

This is not a totally new idea in Indiana. Its something that’s been tossed around during meetings of state Superintendent Glenda Ritz‘s Blue Ribbon Commission. The state employs Teach for America graduates, and career professionals with bachelor degrees can teach in middle or high school classes through the state’s “Transition to Teaching” program.

But it’s not altogether out of the question, either.

According to Teresa Lubbers, the state’s Commissioner for Higher Education, enrollment in traditional teacher preparation programs declined 37 percent between 2004 and 2014. However, she adds that this drop doesn’t take into account teachers who come into classrooms via non-traditional programs such as TFA, the New Teacher Project – or even those who earned other degrees in college, but earned a teaching certificate on the side.

And Scafidi says Indiana mirrors the nation in the drop of candidates who want to become teachers through traditional routes.

Committee co-chair Rep. Bob Behning, R-Indianapolis, acknowledges that Indiana is already doing this kind of work, but adds that it might not always provide the most well-prepared instructors for specific subject areas.

“Under REPA III, to be in a program like TFA you have to take your content area exam before you start the program,” Behning explains. “That’s fine for most of them, except special ed. Special ed is something that isn’t something you’re going to find in a traditional program, it’s going to have to be a special education program. That’s one area I have some concern.”

Dee Emmons, a teacher in Kokomo’s Western School Corporation, has another set of concerns. She says programs like TFA tend to look at teaching as a job, and not a lifelong profession.

“It’s stop-gap,” Emmons says. “It’s teaching our young people that teaching is not something that is a career.”

And that attitude, Emmons says, puts a lot of pressure on the rest of the schools those educators populate.

“I think it would be difficult for me to go into a profession and not be trained properly, and expect the people who are trained to teach me how to,” Emmons says. “I think that’s asking a lot. So I don’t know how feasible that is.”

The study committee did not present any recommendations at Monday’s meeting. They will reconvene next week Monday to discuss potential solutions.