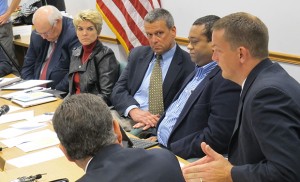 State superintendent Tony Bennett (center) and State Board of Education members discuss the REPA II proposal at their meeting in Indianapolis on Dec. 5.

You don’t have to have a degree in education to become a teacher in Indiana — a fact the State Board of Education underscored last month.

But after a last-minute addendum to a package of changes to the state’s teacher licensing rules, known as “REPA II,” non-education majors will need to receive training on teaching strategies in order to keep a teaching job.

That’s an eleventh-hour change to the REPA II package, which the State Board already approved in principle by a 9-2 vote in early December.

Late last week, state education officials put the change on paper, meaning the Board will have to take one last vote on the final piece of REPA II at its meeting Wednesday.

That final piece dials back a controversial provision of the package, called an “adjunct permit.”

As initially proposed, anyone who earned a Bachelor’s degree with at least a 3.0 GPA could have taken an exam to earn the credential. It’s not exactly a teaching license, but it’s enough for anyone who gets good evaluation ratings to hold down a teaching job.

But the final change — which board member Neil Pickett proposed just minutes before a final vote on the REPA II package — adds a requirement that teachers must complete a “pedagogy requirement” if they wish to keep their jobs.

What ‘Non-Traditional’ Teachers Will Have To Learn

According to the final language, if a permit-holder wants to renew his license in five years, he’ll need to receive training in these areas:

Where will teachers receive this training? They could receive it in the school itself, “through school-based professional development,” through a college, or a “professional education organization.”

The above requirements should look familiar to one demographic: vocational education teachers.

As we pointed out in our initial story, the “workplace specialist” license allows for someone who has experience in an occupation — but not not an education degree — to receive a teaching credential. Workplace specialists have to complete professional development courses if they want to keep their licenses.

The adjunct permit riled officials at the state’s higher education institutions, among others, who charged the adjunct permit would “de-professionalize” teaching in Indiana. They also say it was inappropriate for the State Board to have passed the rules despite opposition from incoming state superintendent Glenda Ritz. Her concerns about REPA II became central issues of her campaign.

But REPA II supporters say the new rules place greater importance on teachers having robust knowledge of the content areas they’re teaching. Schools and districts, they say, will not necessarily hire teachers with adjunct permits in large numbers, but need the flexibility to hire the best non-traditional applicants for teaching jobs.

We break down the arguments, pro and con, in more detail here and here.