State officials are investigating whether or not A-F accountability rules still exist this year.

Indiana’s Department of Education is looking into the issue. Sen. Luke Kenley, R-Noblesville, tells StateImpact that he met with department officials this week and discussed a potential technicality in state law that will make whatever grades are assigned for the 2015-16 school year void.

This is pretty complicated, so stick with us….

The problem allegedly lies in whether or not the State Board of Education correctly followed the letter of the law in its rulemaking process for A-F between April 2013 and now. Some sources claim that if they did not, it means Indiana could potentially operate for a full school year without an A-F standard in place.

Even if this is true, it’s likely the grades assigned for the 2014-15 school year would hold true, and the state would still be able to pick up with a new, recently-approved A-F system in the 2016-17 school year.

This came about after Kenley met with IDOE staff this week to go over the timeline for administering performance pay for teachers, now that there is a delay in getting ISTEP+ scores. It was during that meeting, Kenley says, that the IDOE first brought up the concern that something might be off with the A-F law.

“[We’re looking] to see whether the rule is valid or invalid and I don’t have any idea what the status of that is, it was just brought up as a discussion point,” Kenley says.

After this meeting Kenley took the issue to Legislative Services Agency and is waiting to hear back.

Department of Education spokesperson Daniel Altman did not acknowledge his department brought up the potential problem with the law, and says the IDOE is looking at the law in preparation for calculating the A-F grades for this year like any other year.

“Through those preparations we’re doing our due diligence making sure we have all the i’s dotted and t’s crossed,” Altman says.

Altman says the Attorney General’s office has been contacted, although he would not specify for exactly what purpose.

It will likely fall to the Attorney General’s office to provide an opinion on whether a critical misstep was in fact made. 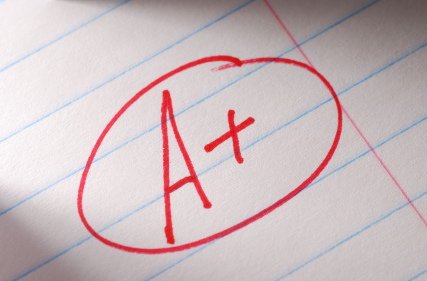 State officials are looking into the possibility that schools might not receive A-F grades for the 2015-16 school year. (Photo Credit: ludwg/Flickr)

Since 1999, Indiana schools have received accountability scores under Public Law 221 – scores based on factors like how many students in a given district are passing state standardized tests. In 2012, policymakers approved a new calculation to include in the formula called a “growth model,” which compares students’ academic performance to that of their peers across the state.

A year later, in 2013, the General Assembly asked the INSBOE to rewrite the A-F system yet again to account for individual student improvement on state tests, and for the addition of state tests to four more grades. Lawmakers were also concerned about the grading formula after news emerged that former state superintendent Tony Bennett had tweaked it to lift scores for a select number of schools.

Indiana is still operating under the old A-F rules – which are supposed to dictate how school grades get calculated for the 2015-16 school year. Those rules will be phased out when new rules the board approved in May take effect next year.

All of this happens as schools are still waiting to receive student scores from the 2015 ISTEP+ cycle. Testing company CTB informed the INSBOE in August that there may be issues with grading new technology-enhanced items, which means the release of scores may be delayed until as late as December 2015.

Additionally, the state board is still deciding exactly how they’ll even assign the new A-F grades that come after those new test scores.

Long story short, since Indiana rolled out a new set of academic standards after dropping the Common Core in 2014, the state created a brand-new ISTEP+ to match and many people are worried student scores will be low the first year. But Indiana has permission from the U.S. Department of Education to utilize an option to be flexible in using accountability during transition periods for standards and assessments, since they play so heavily into school grades and teacher evaluations.

The IDOE recommended an option they’re calling “Hold Harmless,” which would assign each school the better A-F grade received between the 2013-14 and 2014-15 school years. They say this option is aligned to both state statutory requirements as well as federal flexibility standards, so as not to jeopardize the state’s No Child Left Behind waiver.

However, Governor Mike Pence said Indiana will not take advantage of that opportunity and will continue to hold schools accountable through the state’s system.