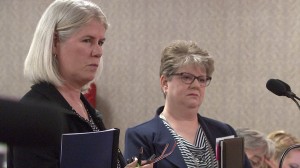 CTB president Ellen Haley and Indiana Department of Education Assessment Director Michelle Walker address the State Board of Education Wednesday. CTB told the board it will take one extra month to score all of the state’s ISTEP+ tests. (photo credit: Steve Burns / WTIU News)

Indiana students, teachers and schools will not see results from this past spring’s ISTEP+ likely until the end of this year, after testing vendor CTB informed the State Board of Education Wednesday there are issues with scoring that will delay results.

During Wednesday’s regularly scheduled board meeting, CTB President Ellen Haley spoke to the board and said CTB is behind in its scoring procedure because of new, technology-enhanced items that appeared on the test for the first time this year. The items allow students to fill in their own answer, and Haley says the problem is Indiana students entered answers that were correct, but not in CTB’s answer bank, so the online rubric marked it as wrong.

CTB now has to go back through the tests and double-check these answers so students can get credit for their correct work.

This upset many board members, including Vince Bertram, who said he was confused how the company was not prepared for this outcome.

“I would think that after years of experience and millions of tests that we would understand how a fifth grader may describe and come up with a correct answer for the perimeter of a rectangle,” Bertram said.

But Haley says Indiana is in this situation because we did not have time to field test these questions, since we developed the test so quickly after adopting new standards.

“Normally, this would all be done in your field test year when nobody was waiting for their scores, you’d have all the time in the world to look at the items, look at the rubrics, look at the student responses,” she said. “We’re doing it in the middle of an operational year.”

Because re-scoring will take more time, tacking an extra month onto the entire process, there will be delays in getting schools individual student scores.

Haley said CTB hopes to have scores to the Department of Education by early October, so the INSBOE will be able to issue cut scores (the score that determines passing or failing) at the October meeting. It will then take eight weeks for CTB to issue final reports on the ISTEP+ scores, meaning schools will know how their students performed by December, if everything goes according to plan.

By not getting scores until December, A-F grades will likely be delayed into January or February 2016 – meaning teacher evaluations will also be delayed.

Board member Gordon Hendry says waiting this long to issue accountability measures is unacceptable for teachers and schools.

“My concern is that schools receive their grades essentially for the assessments that were given earlier this year almost a full year after their kids have taken the test,” Hendry said.

CTB’s contract with Indiana ends this year, and testing company Pearson will take over. State superintendent Glenda Ritz says as the IDOE begins working with Pearson they will work with them every step of the way to prevent these current issues from repeating themselves.